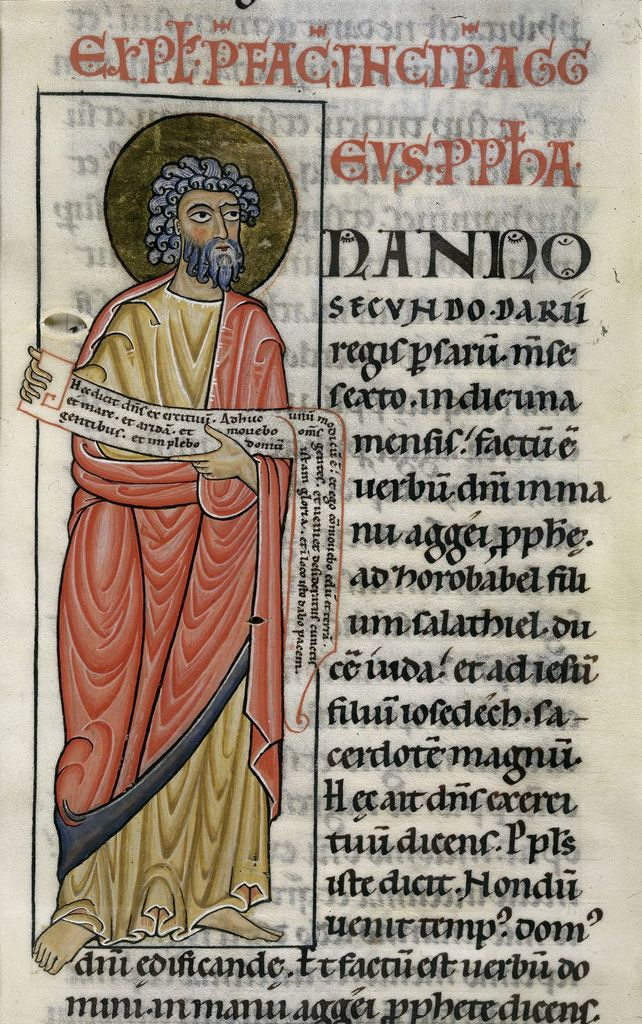 Last week, we talked about the prophet Jeremiah living in the midst of the destruction of his community after the Babylonians came in and ransacked Judea. And as you remember, they also sent many of the citizens of Judea into exile into Babylon. Well, as we know, empires come and go, and it wasn’t long before the Babylonians were defeated by the Persians. Here in the Book of Haggai, instead of living under Babylonian rule, Judea found itself under Persian rule. The Persians, in a way, were kinder and gentler overlords than the Babylonians…or at least they had a very different strategy of governing. Rather than just, like, crush and destroy their newly conquered lands, the Persians were strategic.

They tried to win the cooperation of the residents of Judea and their many other provinces by allowing each province limited autonomy, some level of self-rule if you will. Also, the Persians thought it was just fine if each province had its own religion. In fact, the first Persian King Cyrus is said to have proclaimed that Yahweh told him to rebuild a temple in Jerusalem. So, King Cyrus sent all the exiled Judeans back home to get building the temple. Alas, 18 years pass, and no one is working on the temple yet.

Enter the Prophet Haggai. By this time, there is a new Persian King named Darius, but King Darius still wants this temple to get built. Interestingly, we know the exact dates that Haggai was active in Jerusalem. His prophetic career started on August 29, 520 BCE and ended on December 18 in the same year. Just shy of four months. And his entire prophetic career is contained in the book we read from today – the Book of Haggai. It is all of two chapters long.

I think I told you in this week’s e-newsletter, I took a whole course on this two-chapter book in seminary. (So if you think I am giving you too much detail here…trust me…I could go on and on.) But one of the most relevant things I learned about the context of this book was how small Judea and Jerusalem were at this time. Listen to this, Jerusalem only had about 3,000 residents when Haggai was active as a prophet. That’s like the size of Auburn, Nebraska! … and the entire province of Judea had only around 30,000 people. And that is one-third of the capacity of a full Memorial Stadium when the Huskers are playing on a pre-pandemic game day.

In summary, Haggai was a very minor prophet whose work is recorded in the smallest book in the bible working in a province with a population far smaller than the capacity of Memorial Stadium whose capital city is the size of Auburn. Every detail of this story would tell us that Haggai is not going to amount to much.

But I’ll be darned if the foundation of that temple wasn’t laid by the end of those two chapters! And we know that the Second Temple was eventually completed because it’s the very same (though significantly refurbished) temple where Jesus flipped over tables 550 years later. And here we are talking about Haggai and his great work getting the temple project started in Omaha, Nebraska 2700 years after he lived. I’ll be darned.

So, how does Haggai get this temple built?

Well, he obviously cannot do this alone. He has a lot of allies in this work. First, as I mentioned, he’s got the Persian King Darius behind him. That never hurts. Then he appeals to the leaders of the Judean community. The prophetic word Haggai shared in our reading today was directed to Zerubabbel, the Judean Governor and Joshua, the high priest. To be honest, he wasn’t the only prophet working during this time: Zechariah and Malachi were also running around telling folks what great things could happen if they would attend to their temple-building duties. Haggai also obviously had to rely on all the people to turn their attention away from building their own houses to helping to build God’s house.

Yet Haggai was the catalyst in re-building the temple. In four months’ time. In prophetic words that only filled two chapters. Haggai was the The Little Prophet that Could.

Now, it’s important to understand that in the second temple period, the temple was not just about worship. It was also a kind of administrative and community center. Haggai knew that rebuilding the temple would also help to rebuild the broken community structure that suffered so badly under the Babylonians. Haggai knew that the temple would create shalom – peace and prosperity – not simply because God was happy the people built the temple, but because building the temple meant the people invested in the community, not just themselves. As Haggai says in our reading today, “Is it a time for you yourselves to live in your paneled houses, while this house lies in ruins?” In other words, you’ve spent enough time worrying about your own houses, it’s time to rebuild God’s house and the community with it.

Haggai does it – he convinces all these people to work together and build the temple. It was a modest temple at the time, but we know that it was one small positive step in the grand biblical narrative. It was Haggai’s very small, very particular job in his time in his small community. Yet Haggai made a huge difference by working together with the King, the Governor, the priest and ALL the people of Judea.

This is the essence of what stewardship his about. It is really about how our relatively small offerings of time, talent, and treasure can be part of something so much bigger than ourselves. As I tell you all the time, your giving makes all that we do in and through Hanscom Park church possible.

This week, as we put together our 2021 church budget, I asked the Stewardship & Finance Team and Church Council what ministries were they proud that we could do together, even during a global pandemic? I don’t want us to miss that detail. We have done so much this year during a global pandemic. You have been faithful in your giving and your volunteering. It has been amazing.

First, we didn’t miss a beat when the pandemic started. We MacGuyvered FB live streaming and everyone enthusiastically participated from home. We did not let physical distance stop us from worshipping God together. Then, we received so many generous special offerings through the Joash Campaign so we could have this amazing audiovisual system. This system would not work, however, without the dedication and faithfulness of our AV team to make it not just work but SING! (I don’t want y’all getting big heads at the AV table, but someone may or may not have said our service was the “best” they had seen on Facebook Live.) Our online outreach has allowed us to love and support and connect with people across the country and around the world.

We also took advantage of the ability to be outdoors together this summer. So many people worked together in the garden, and then when the COVID numbers got low enough, we started Worship in the Garden! 60-80 people each week worshipped out on our West Lawn, and we even got a balcony for our church as the neighbors in the apartments across the street worshipped with us.

Even though it was a little risky, we went forward with our plans for Pastor Peter Karanja to be our intern this summer, and Peter helped us develop a vision of ministry with and for New Americans…which we couldn’t have done without the help of Pastor Eddie either! Because of Pastor Eddie, we distributed $4500 worth of grocery cards through a grant from Tyson Foods to families affected by the pandemic. Our fledgling New American ministries culminated in our big distribution event for immigrants and refugees that served over 2,000 individuals right on our lawn and in our parking lot. That happened because of the work of about 20 Hanscom Park volunteers and our partnerships with Benson Area Refugee Task Force, Restoring Dignity, and the Presbyterian Church of the Master.

Also in the summer, we didn’t just have a Virtual VBS…but Hanscom Park church LED a Virtual Vacation Bible School for a group of four churches. And people from all of those churches worked together….a whole team of people made that happen! We also continued our Children’s Creative Night on Zoom this fall, and the Youth Group met during the whole pandemic using Zoom.

We were able to have a Craft Fair & Garage Sale, and that team worked their collective butts off making sure it was socially distanced and sanitized! And we timed it perfectly so that it was scheduled for the lowest dip in COVID cases.

Through the whole pandemic, the leaders of this church took a wise and strong posture toward the pandemic. We acted out of love of neighbor and our first obligation to do no harm. But that didn’t mean we just stopped doing stuff. Heck no, we did and will do the hard work of re-imagining how to be the church so we can keep people safe AND connected to God and one another. We did that through calls to the whole congregation, ongoing monthly calls to homebound members by Visitation Team, FB Live lunches with Pastor Chris, virtual and one in-person Grow Group (again in the low COVID sweet spot).

In our meeting we also forgot to add we did fundraisers to help people who were not just US. Hear this, church. We were the church by not worrying about the church first! We did fundraisers for direct COVID relief, then Together Omaha, and for JP Lord School.

We did so dang much together this year! And every one of you who has given to our mission and ministry was a part of it.

Friends, like Haggai, we are The Little Church that Could. We are a relatively small church in a big city. But like Haggai used his four months, we used these past nine to create a virtual temple, to create as much peace and prosperity and hope as we could in the midst of a pandemic…and next year, we expect our impact to be even greater, as we continue to create a community of love and support that reaches out to embrace more and more people.

We are the little church that could and can – when we endeavor to do God’s work together.

Thank you, and thanks be to God.