So I know it’s a little obscure, but this is my favorite stewardship scripture. In fact, I preached about this scripture three years ago this almost to the day. Let’s think back to that time. It was November 7, 2017. I had only been the pastor here at Hanscom Park for about four months. We were still totally in the honeymoon period. It wasn’t an election year. (Ahhh, so nice.) I had short hair because we could still get haircuts then. We were so young and idealistic. There was no pandemic, and we were a lot less (at least outwardly) divided as a country. Now look at us. Do you know how much grayer my hair is now? A lot. It’s a lot grayer.

The last time I preached on this scripture, I was also more inward-focused. I was mostly thinking about reviving this congregation. I do think we have done this. We have seen remarkable growth – both spiritually and numerically here at Hanscom Park. Even in the pandemic, we are going strong. But this time, I’d like to think not just about this church – which is great and important – but I’d also like to think about our role healing our country. This is a far taller order, but the one to which we are called.

So with that in mind, let’s look at the scripture. What’s going on here? Well, this is a story about Jeremiah, and he is having a no good, very bad, horrible time. He’s in prison in fact. He irritated the king with one of his prophecies. And while he sits in prison, his country is crumbling around him. Things have gotten really bad for the people of Judah, Jeremiah’s community. Their country has been almost entirely overrun by the Babylonians, and they have been destroying the place along the way.

Everything is quite literally broken, and many of the people of Judah have been taken in exile away from their homeland, so the community has been totally disrupted and divided. Jeremiah’s world is broken. Perhaps not unlike how our world is broken.

And what does God tell Jeremiah to do in the midst of that brokenness and division? He tells Jeremiah to buy a field. God tells Jeremiah to buy a field and get witnesses and make sure the whole thing is done properly. Because God is calling for a commitment. God doesn’t say, maybe just rent some land here because you need to hedge your bets on what might happen in the future. No! God says, purchase land here, right in the middle of this brokenness because a new day is coming when the people will return their hearts to me, and all things will be restored…and Jeremiah obeys.

Which is something…because commentators tell us that Jeremiah’s decision to buy this field is “not a sound decision.” This is not like a oh-he’s-just-buying-low-so-he-can-sell-high situation. Commentator Patrick Miller writes: “There is nothing in the present situation that would precipitate investing in the future of Judah. Siege, defeat, and exile are the present realities.” In fact, to Jeremiah’s neighbors, this simply looked like “real money paid for worthless land.”[1] Jeremiah had no rational reason to expect that things would turn around. Judah was a lost cause.

As I reflected on this scripture this week, I began to ask myself: what is our present brokenness? What is our lost cause? What has been so crushed in our society that it looks like it ain’t ever coming back? Here’s what I came up with. Two things: empathy and unity. Empathy and unity in this country have been tossed out the window, stomped on, and ground into the dust.

Yet, I’m pretty sure we can’t do our Christian job of loving our neighbor without some empathy. Love requires empathy. We have to see and know and acknowledge the full humanity of people before we love them. And without empathy, there will never be true unity.

Now, my biological family is really pretty homogenous in every other way. We’re all white people. We all grew up in the United States. We’re all working-to-middle class. And that’s all good. I love my family. (Shout out to Northeast Wisconsin!) But we are just a small slice of God’s good human creation. So I have had to open my heart to people outside my biological family to learn to love everyone who God calls me to love.

Even this week, God opened my heart in empathy. I heard that Ethiopia was on the brink of a civil war. Did you know? Have you heard that? I’m going to tell you the truth. Three years ago, I would have thought “that’s too bad” and then forgotten about it. But because of my friendship with Pastor Eddie, I empathized. I thought about the lovely people in the Ethiopian Community Association who meets at our church building. I thought about their love for their country and the people they know there, and I prayed for them.

And as I prayed for Ethiopia and the expansion of my heart to include all people equally, I came to believe that the root of our disunity, our lack of empathy, is that we don’t know “the other” well enough to consider them family. Which is a problem because we are ALL part of the family of God, and that is the most important family of all.

As Christians, we have to love all of God’s people. Not just the ones who look and think like we do. That is hard, and our country is failing at it in the most serious way right now. Lack of empathy is our most present brokenness. Unity is our lost cause. But in the midst of brokenness and lost causes, God calls us to invest in hope.

When Jeremiah bought that field at Anathoth, his neighbors were probably laughing at him. That field was a dumpster fire, the people who lived in the land were about to be exiled for many years. What a waste of money, they said! This is lunacy, they said! That field is never going to be anything but an uninhabited pile of rubbish. And it sure looked like they were right.

But Jeremiah’s prayer as he plunks down the money for that land is, “Ah Lord God, It is you who made the heavens and the earth by your great power and by your outstretched arm! Nothing is too hard for you!”

In this same section where Jeremiah commits to buying land, commits to investing in God’s promises, he reports this vision that God has given to him. And it goes something like this:

I am going to restore the fortunes of my people

and have compassion on their dwellings;

the city shall be rebuilt upon its mound.

Out of it shall come thanksgiving and the sound of merrymakers.

They shall sing aloud,

and they shall be radiant over the goodness of the Lord;

I will make them many,

and they shall not be few.

And you shall be my people,

and I will be your God.

This is God’s dream for the world: a dream of peace and prosperity and thriving for all people. And three years ago, I told you that I believe the church and this particular church has a significant role to play in calling the rest of humanity into this project of creating a future with hope. Three years ago, I didn’t know what that role was exactly. Well, I can see it now. 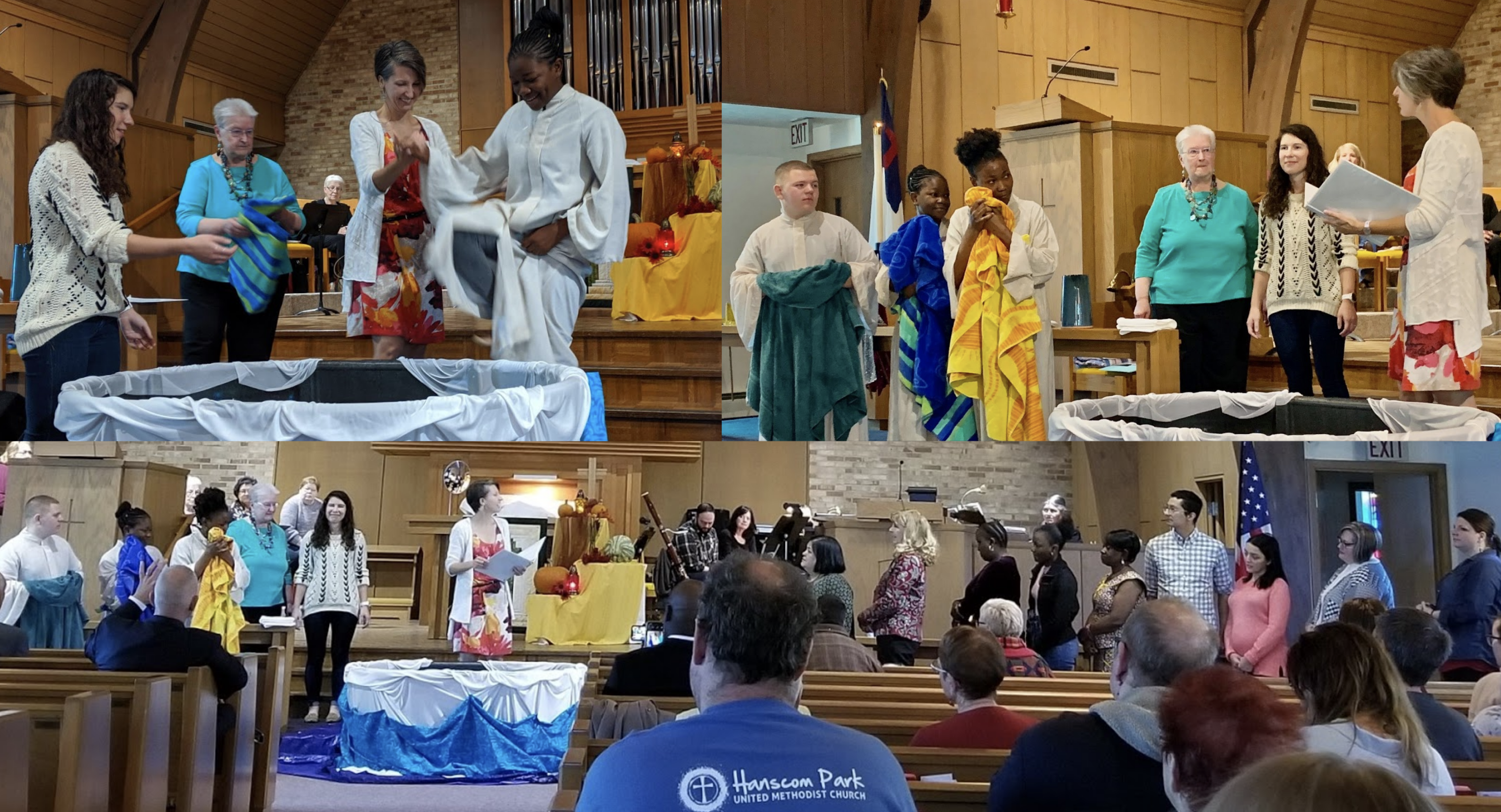 A/V Team, can we see those baptism pictures? Remember this, church? This was just a little over a year ago. This was our very first immersion baptism, and we welcomed 12 people of various ages and races and ethnicities into our community. We were blessed with our first Congolese American members. We did the immersion baptism because that was part of their tradition – in fact, it is part of our United Methodist tradition in many places.

Recently, I saw on Facebook that another United Methodist church was mad because their pastor had done an immersion baptism. They were mad because “that was not the way we do things around here.” Reading that, for the very first time, it occurred to me how remarkable it was that this was an unmitigated celebration for us. We all saw the Holy Spirit at work bringing us the gifts of new people and new traditions. We all saw that having more people and doing things differently meant we were following exactly where God was leading us.

This baptism, our hosting of the Ethiopian Community Association, Peter’s ministry with us this summer, the Backpack Blessing, the thousands of immigrants and refugees served at the Fall Give Away event…Now I see it. Now I see what role we will play.

I believe that we are being called to invest in our ministry with immigrants and refugees in our community. Yesterday, I had a meeting with our United Methodsit Conference – this two-state-wide body that encompasses all of Nebraska and Kansas. Now, I have not heard their decision yet, but I believe they will be willing to invest in this vision so that Pastor Peter can come back and lead a ministry where we serve, support, and empower immigrants and refugees. And as we do so, we will get to know people who are different than us, we will learn to care about them and the things they care about, and we will grow in empathy. We will even invite them to worship, and we will be open to changing the way we worship if that is how we can best love them.

I believe we can be transformed into an intercultural church – a church that truly lives up to the vision of Revelation 7, where there are “great multitude that no one could number, from every nation, from all tribes and peoples and languages.”

We can be a truly purple church, with people who vote red and blue and purple and green. We can be a church filled with people of every shade from white to brown to black, and rainbow technicolor to boot! And yes, I know those things don’t always go together. I am not saying it is going to be easy.

But I have been thinking and praying about this vision, and here’s where I am at. Is it foolish to double down on creating a diverse community in a time of great division? Was it foolish for Jeremiah to buy that field? Maybe it is.

What if we try to do this and we fail?

What if we could have done this and we didn’t even try?

Well, I can live with failure, but I cannot live with ignoring the dream that God has set before us. And you know what? I don’t think we will fail. Because creating a radically diverse community where we grow into a beacon of empathy and unity for Omaha, for our Methodist Conference, for the whole world…well, that IS hard for humans.

But, as the prophet Jeremiah reminds us, nothing is too hard for God.