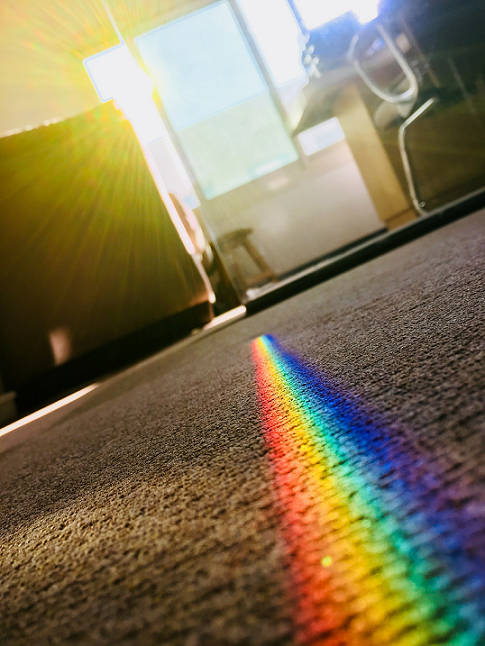 Good morning, everyone!  I’m so happy to be here with you this morning and so thankful that Chris has asked me to share with you for National Coming Out Day.

In the first section of our scripture this morning we find what might be a familiar to you passage where Jesus tells the disciples that he will soon be going to his Father’s house and in that house are many rooms—Jesus is going to prepare a place for his disciples there.  And Thomas, in true ‘disciple’ fashion has no idea what Jesus is talking about and asks, “if we don’t know where you are going, how will we know the way?”  Jesus responds with the familiar words of “I am the way, the truth, and the life, no one comes to the Father except through me.”  This house—I think we often equate this house Jesus speaks of as heaven.  But…it isn’t really meant as a reference to heaven, it actually was never meant to be a geographical location at all.  The location is a symbol of relationship—it is a reference to this mutual indwelling of God and Jesus.  If you read back into chapter 1 of John it describes Jesus’ location as “in the bosom” of the Father.  This indwelling is very intimate.

This relationship is reciprocal, mutual, AND THEN invites all of us to be a part of it—which brings us to this image of many rooms—we are all, every single one of us, invited into the bosom of God.

Then Philip quips in with his question at the second half of the reading…maybe more of a demand, saying just show us the Father and we’ll be satisfied.  Blah blah blah, Jesus, just get to the point.  What Philip is struggling with here is the idea that the incarnation is the ultimate revelation of God.  Jesus is the enfleshed presence of God.

Jesus then seems to maybe be a little irritated, maybe annoyed, and says, “have you not been with me all this time?!  Whoever has seen me has seen the Father, how can you say, ‘Show us the Father’?  Don’t you believe that I am in the Father and the Father is in me?” Jesus goes on to say, I don’t speak these things on my own.  The Father who dwells in me does the works.  Then Jesus asks them to believe.  Or at least believe on account of the works themselves.

And the golden verses, and my favorite part—Jesus says, “I assure you that whoever believes in me will do the works that I do….they will do even greater works than these because I am going to the Father.”  Let’s just hear that again…they will do even greater works than these.  I have to admit that when a friend mentioned this scripture to me, I was in disbelief—does it really say that?!?  I had to run to my bible to confirm.  Jesus then continues with: I will do whatever you ask for in my name so that the Father can be glorified in the Son.  Jesus has always said that the works he does are God’s works not his own and here in this passage Jesus is saying…the same is true for you…and you, and you, and you, and me.

We are asked to join this community—to embrace people and to join in the mutual work of God in the same way that Jesus’ works were God’s works, so will our works be God’s works.  He’s not saying that we are going to do greater things in the way that we will be doing them better.  I don’t know about you, but I’ll never be able to turn water into wine.  But what this means is that we pick up the work of God in the world.  That is what makes it greater…because WE are the ones who continue to tell the story of the Word made flesh and shower the earth with God’s love.  In all the large and small ways that we continue the work of God we are in community together—and our love for God will lead us into doing even greater things.

When I think about all of this, I am reminded of a Jewish story that is a part of the Kabbalah, which is the mystical interpretation of the bible.  I once listened to an On Being podcast where Krista Tippet speaks with Rabbi Lawrence Kushner—it’s amazing and fantastic and if you are into podcasts, I highly recommend it!  In the interview Rabbi Kushner is explaining Jewish mysticism and some ideas of regarding creation.  One of the creation stories is that God planned to create 7 vessels and fill them with divine light.  If one became full it would flow like a fountain into the next vessel and so on until they were all neatly filled.  But, God didn’t anticipate how potent the light was and they all shattered into a million pieces and the whole universe is made up of the resulting shards—the world is this cosmic garbage heap.   Rabbi Kushner then goes on to explain tikkun olam which is the repairing of the universe, which is our work in the world. In each and every person and every thing this divine light is trapped and our part in repairing the world depends on how we treat people and things.  Rabbi gives an example of a broom—if the broom is used to swat at a child he’s mad at, that divine light in the broom dims and gets harder to release, but if the broom is used to sweep a space to get ready for a wedding or to clean the place up then the light inside the broom is released, the broom is fulfilled, and the world is that much closer to being repaired.

So what does all of what I’ve just said have to do with National Coming Out Day?  I’d love to share just briefly a little bit of my own personal story:

I’ve known I was gay, probably since middle school—even if I wasn’t quite sure what it all meant at the time. When I first told someone in college, we didn’t agree. I spent a lot of time struggling and wondering if God would love me, if the church would love me.  I’ve been a part of churches that thought I should pray the gay away.  During this time I was also thinking about pursuing seminary, but didn’t because I wasn’t sure it would even be possible.

When I started coming out to everyone 7-8 years ago—I felt like every time I told someone that I was going to lose them forever.  It was hard and it can really be damaging to not be fully embraced as you are.  And it’s incredibly hard to live authentically when you wonder if you’ll be embraced.  There were times when I wanted to die, and there have been times when I have felt immense joy.

I’d like to also share a little bit about my own experience with Tikkun Olam.  Last year, almost exactly to the day, I met a new friend in the hopes that I would find a place to share my faith and she might point me to some folks for community.  What actually happened is that we ended up finding a soul friend in each other.  She was one of the first people that coming out to was a non-issue, I felt like I could be completely me right from the beginning.  She embraced me just as I am.  She also restored some of the divine light that is within me.

I’m sure most of you in this room know about what is going on within the United Methodist Church — I chose to attend general conference in February in St. Louis.  I knew it would be hard, and it was, but one night as we were leaving the convention center me, my friend, and another person that was with us were crossing the street and had to walk by folks of the Westboro Baptist flavor, holding picket signs with hate speech and yelling awfulness.  One of the protestors shouted, “All the homos should be taken out” and in that moment I just wanted to collapse, I felt like I had been hollowed out by this man’s words.  I didn’t speak any of these feelings and the other person that was with us was talking.  My friend, without any communication, grabbed my hand and held it until we got to the other side of the street.  When she took my hand, I felt seen, I felt filled back up inside, I felt loved.  It was such a beautiful and meaningful experience that I don’t have any more words to it.  But, this is an example of tikkun olam—she was helping to repair the world and restore the divine light within me.  She was the enfleshed presence of God to me in that moment.

We are all, NO EXCEPTIONS, invited into the bosom of God, into community with God and others.  We are continuing to be God enfleshed in the world. We are called to carry on the work of Jesus in the world to be a part of tikkun olam, the repairing of the universe.  This means embracing people as they are, embracing who they are, their stories, their pain, their joy.  When we are a part of that work, we can only make the divine light shine even brighter and give love and hope to those around us.