I learned something fascinating this week. I was reading the Brené Brown book, Dare to Lead, for our Thursday night book group. In it, Brown describes the courageous leadership of an Air Force Colonel named DeDe Halfhill.

In the book, Colonel Halfhill shares the story about how she learned of an epidemic of loneliness in the Air Force that appeared to be contributing to low morale and even hopelessness among Air Force personnel. She notes that this sense of hopelessness is so severe… that the military in general and the Air Force in particular is struggling with increasing levels of suicide.

And she thought, huh, humanness? What does that mean?

So she digs up an old copy of this manual and begins reading about this 1948 Air Force value of humanness. She was struck by how much emotion she felt emanating from the pages she read. She was reading words like, “to belong, a sense of belonging, feeling, fear, compassion, confidence, kindness, friendliness, and mercy.” [2]

She writes, “I was amazed….Here’s this military document that’s talking about leadership with mercy, and kindness, and belonging, and love. Yes, the word love was in a military leadership manual.” [3] 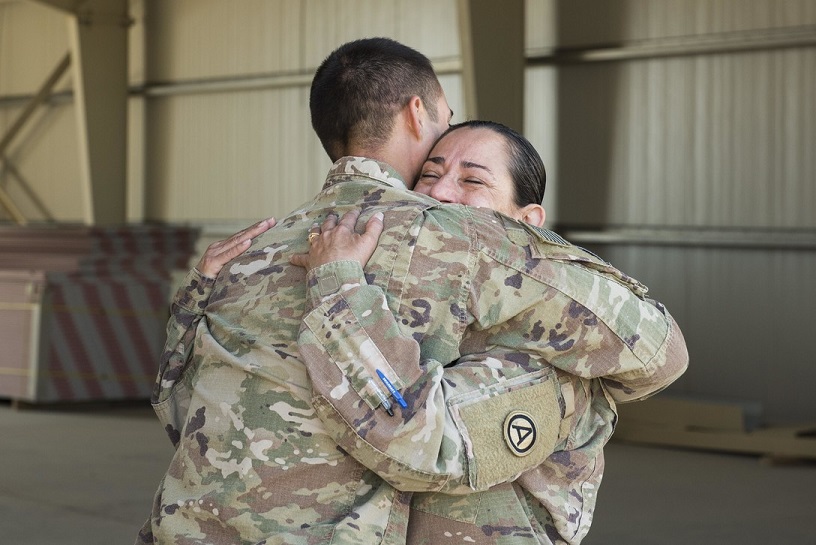 So then Colonel Halfhill went to the current leadership manual of the Air Force. She did a keyword search on her computer. She put in each word: belonging, fear, compassion, kindness, mercy, love. She writes “Over and over again each search turned up zero.” [4]

She writes this: “Our most current manual…uses phrases like tactical leadership, operational leadership, strategic leadership. Important concepts, no doubt, but the concepts provide little guidance to our young leaders on how to deal with the many complexities of how people…process the experience of being in the military during a time of war.”[5]

I was further surprised to learn this week from Emily Baker – an Air Force wife of Lane – how seriously the Air Force is taking suicide among its members. Emily shared with me that the Air Force has already hit the number of suicides in its ranks in 2019 that occurred during all of 2018, and it’s only October.

So I did some research, and the information is out there. A simple Google search turned up – as the first result – an article from The Air Force Times. I learned from the article that, at the current rate, by the end of the year, we may lose 150-160 airmen to suicide. According to Chief Master Sergeant of the Air Force Kaleth Wright, “We lose more airmen to suicide than any other single enemy — even more than combat.”

In response to this crisis, the Air Force has ordered a “resilience tactical pause.” In other words, every unit will pause their operations for one day in order to focus on resiliency and suicide prevention. [6]

Of course, increases in suicide are not only happening the military. The American Psychological Association reports an alarming increase in the suicide rate among all people in the US in the past twenty years. This is after a period of decline in the rate – it started going back up. In the past twenty years, there’s been a 30 percent increase from 10.4 to 13.5 suicides per 100,000 people per year. [7]

Now, the reasons for increased rates of suicide are obviously very complex. But I want to look at one reason that Colonel Halfhill recognized. She identified among her Air Force personnel a sense of loneliness. Many airmen, when asked directly, confessed to feeling lonely. There was this sense of disconnection or isolation. But the word that really captured it was lonely. No one was seeing them for who they truly were – as truly human, with all the emotions and complexity that go along with it.

And if we think about those two leadership manuals: the 1948 one and the 2011 one…well, humanness has been written out of existence. The people in the Air Force are tactical leaders, they are operational leaders, they are strategic leaders. But there’s no room for them to be lonely humans.

To be clear, I believe that this is not just a military problem. I am not at all picking on the Air Force here. I think they are doing a laudable job of addressing the increases in suicide in their organization.

Again, the reasons are complex, but perhaps the people in the intense pressure-cooker of the military are simply showing the dangers of ignoring our humanity for all of us. I submit that we all, most days, run around in the world hoping to deny our humanity. Our entire culture and way of life is built on a system of productivity and consumption. Many of us are busy to the point of exhaustion. We act like we humans are machines.

You know this – humans are made not in the image of a machine. We are made in the image of God, and that means we are made for relationship with God and one another. Yet we are tempted to treat each other – even ourselves – as cogs in the machine. Because it protects us from admitting our own humanness and vulnerability.

In today’s scripture, we encounter a woman with a big problem. She has been bleeding for 12 years. This is not only a physical problem; it is a serious social problem. See, her bleeding makes her ritually unclean. In this line of thinking, if she touches anyone else, she transmits her ritual uncleanness to them. The scripture tells us she has tried to solve this problem through the appropriate channels. But all the cures she tried failed to work. It left her destitute and desperate. She has been totally isolated, totally cut off from relationship with others.

When she hears that Jesus is going to be in town, she sets out. According to theologian Art Ross, she sets out to Jesus with “courage tinged with desperation.” [8] She knows she is not supposed to touch anyone, much less this famous rabbi / prophet / Jesus guy. But she is desperate. She is also courageous.

So she enters the crowd (not allowed) and reaches out and touches Jesus’ cloak (also most definitely not allowed). Now, at that moment in the story, when Jesus says, “Who touched me?” … It would have been a real cliffhanger for the people present and the early people who heard this story. I mean this woman had made Jesus – an observant Jew – ritually unclean. This was totally breaking the rules! She had totally befouled him with her dirty humanness.

The people witnessing this event, hearing the story, would have expected Jesus to be irate!

That’s why the woman comes to him with fear and trembling. She too thinks, “Ah crap, I’m caught.” I suppose she could have tried to hide herself. She could have tried to make excuses and deny that it was her. But she knows she’s got no other choice but to tell him the truth – to show him her whole situation: all the messiness, all the loneliness, all the separation from the community and the temple that comes with her very human problem.

And Jesus responds – with absolutely no concern about ritual purity or following the rules. Jesus responds, in the face of all this messy humanness, with compassion beyond all expectation. Jesus is overflowing with compassion and healing power. Even simply mustering the courage to touch Jesus’ cloak meant that the woman was seen, healed, and restored to relationship with her community.

Then Jesus calls the woman “Daughter.” “My child!” he says, “Your faith has made you well.” The woman’s faith which comes from courage tinged with desperation.

I have found that we mostly only admit our humanness when we are desperate. When we run up against that final, undeniable truth that 1) we are burdened with these mortal decaying bodies and 2) we need one another – not as other cogs in the machine but as other fully human, beloved children of God.

But in order to rely on God, and rely on one another – that means we need to really see and be seen…and that is terrifying. We are terrified that someone might see our (perceived) short-comings, and so we spend all kinds of time working so hard so that we can pretend we are fully self-reliant and can go it alone.

And then, tragedy upon tragedy…we foist this inhumanity on others. We refuse to admit we (or anyone else) needs a break, has feelings, has struggles, needs to see and be seen fully – in all our beautiful and messy, messy humanity. Which is so ironic when what we most deeply want and need is someone to know us in all our humanness – and then receive us with love and acceptance.

To risk seeing and being seen is not weak. It takes incredible courage.

But in order to muster that courage, perhaps we need a tinge of desperation. I’ve been thinking about it this week, and I am wondering if maybe that’s what we do when we gather here. When we come to church, when we seek to believe in something bigger than ourselves, we remember our mortal selves. We know that however old we are, it’s all going downhill from here. No one gets to hold on to their physical strength and well-being forever. Not one of us.

So we remember that.

Then we remember our need for love – our total inability to survive all this humanness alone. We talk about feelings and suffering that cannot be avoided.

We look around for God and remember our not-God-ness.

Only when we remember all that, when we engage that hard reality, do we muster up the courage tinged with desperation to bring that all to Jesus. To bring that all to God. To offer our human, mortal, broken, incomplete selves, risking rejection because like the bleeding woman, we really think maybe we are too much a mess to be received.

We have courage here to find God in the church and to find the love and acceptance of God in one another. And maybe we humans let each other down sometimes. But God never fails to receive us with compassion, and give us the power to be restored to community – to be God’s love for one another.

1) Have you ever had the experience of trying to do something yourself and then realizing you had to ask for help do to it? How did it make you feel to ask for help? Did you get the help you needed?

2) Have you ever turned to God or someone who embodied the care of God for you in a moment of desperation? Share about the situation as you feel comfortable. Were you received with compassion?

3) Have you ever had the opportunity to listen to or help someone who was in a difficult situation? How did it feel to be the person to whom someone turned for help?