Last week, we talked about what our Methodist hero John Wesley called “The Scripture Way of Salvation.” In it, he identifies three movements of God’s grace: prevenient grace, justifying grace, and sanctifying grace. I know those are three big words today. But this is really review from last week – so we’ve got this.

Next, is justifying grace. It is present in an event called “justification.” This is that moment of turning toward God, that moment we become aware of God’s presence and we say, “YES, God! Make me more like you!” In this very moment, says Wesley, “Ye are saved!” Justification is turning toward God and committing to continue to turn toward God each day. It is, in the language of today’s scripture, that moment when everything is made new! New life, lived in love, NOW.

Great. We are justified. What happens next? Well, that’s today’s big word: sanctification. Sanctification is what happens after we say “yes” to God and begin to allow ourselves to be shaped by God’s presence. When we are being sanctified, our lives begin to look different. There might be big changes all at once, or little changes day-by-day…but our Wesleyan belief in sanctification means that God does not leave us the same. God is always working on us: helping us to grow in faith, hope, and love.

What I like about sanctification is that you can SEE it. Our scripture today says, “So if anyone is in Christ, there is a new creation: everything old has passed away; see, everything has become new!” 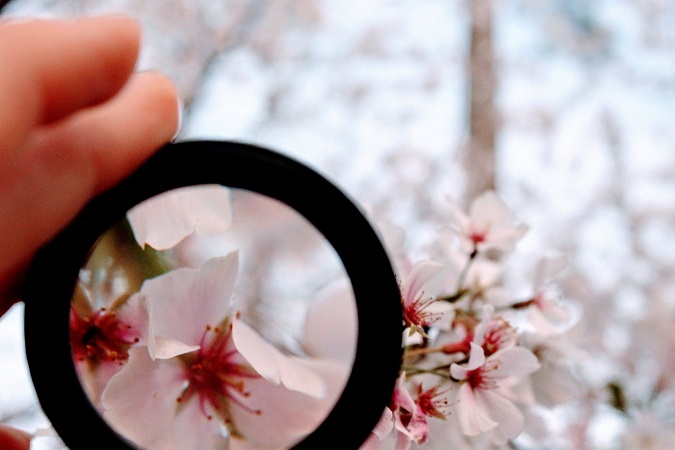 See! Everything has become new. When we are sanctified, we become new creations…and we are also given the gift of seeing the presence of God in one another. It’s like we are given a new set of glasses. We no longer see people as just people; we see the image of God shining through them.

I want to tell you a story. Last summer, I was up in Wisconsin visiting my parents. My dad, who is a Catholic lay person, as part of his ministry, goes to a nursing home there and visits with retired Catholic priests. He had told these priests about his Methodist pastor daughter, so he invited me to go visit with them. Now, you should know ahead of time that none of these priests had any problem with that. They were all glad to meet me.

Well, one priest was named Father Don. Father Don was in the memory ward at the home because of some cognitive difficulties. My Dad said he wasn’t sure Father Don would appreciate my visit as he could be a little less social than the other priests, but he thought we should give it a try. I was game.

Father Don has a cat, so the first thing I did when I went into his room was ask if I could pet his cat. Father Don and I were best friends after that. He could see how much I loved and appreciated his cat, so I couldn’t be all bad.

My Dad and Father Don usually went for a walk outside together, so that’s what we did. Well, part of Father Don’s cognitive difficulty is that it’s really hard for him to come up with the words he’s looking for to have a conversation. So I had to do most of the talking. But I could tell he understood what was going on though because he had a hilarious sense of humor.

One of the first things that happened was my dad said to him something like, “Father Don, I hope you are doing well. I pray for you every day, and I pray for all the other priests.” And Father Don tapped me on the shoulder, looked at me, and I kid you not, he rolled his eyes.

Now I wasn’t sure I had seen what I had just seen at first, so I just kind of smiled. I mean, I didn’t know him, and that was a little surprising for a priest. But a few minutes later in the walk, my dad said something sort of similarly pious about how much and how often we prayed for Father Don. At that point, Dad was walking a bit ahead of us, so Father Don had a chance to literally elbow me, and give me a BIG eyeroll, and we just cracked up.

So anyway, I knew he understood what was going on and what I was saying. As we walked, he managed to ask me about what I did as a pastor. I chatted about this and that, and then I mentioned that I had lots of weddings that summer but not many funerals. And I said to him, I actually prefer doing funerals to doing weddings. And he stopped me, grabbed my shoulder and nodded enthusiastically.

Now, my dad at this point was just confused. He’s looking at us like, “WHY? Why would you weirdo pastor-types like doing funerals better than weddings?”

Well, it’s a well-known secret among pastors that most pastors prefer funerals to weddings. Now, don’t get me wrong. I enjoy weddings. I especially enjoy them when they are your weddings – because you’re my people! But if I had to pick between a wedding and a funeral, I would probably pick the funeral every time.

Why? Because what Father Don and I agreed upon that day – me talking and him mostly smiling and nodding and putting his hand on my shoulder for emphasis – was that every time we had a funeral, we saw God. Every time, without exception, when we sat down with a family to hear about the details of their loved one’s life – the triumphs and the struggles – we always, always saw God at work in the story.

When I first came to Hanscom Park church, I had done very few funerals. See, in younger, new churches like the Urban Abbey, there aren’t many funerals. We had lots of young single folks and college students and young families, so mercifully we didn’t have any funerals during my time there.

So I spent my first couple of years in ministry doing, doing, doing lots of other things, but I rarely got to have the kinds of conversations I have now with families preparing for a funeral. In fact, in retrospect, I was so busy at the Abbey doing, doing, doing what I thought was God’s work…that I didn’t realize I was missing the chance to see God’s work that was already happening in people’s lives.

When I first started meeting with families to plan funerals, I used to worry, “What in the world will I say in this sermon? What if I can’t connect this person’s life with the gospel?” I no longer worry about that. God sanctified me. God gave me eyes to see.

It was kind of like the words we hear from Paul today: “From now on, therefore, we regard no one from a human point of view…SEE, everything has become new!”

I am often brought to tears when preparing a funeral sermon. Sometimes the tears are grief for the loss of the person and grief for the family and friends enduring the loss. That definitely happens. But very often, the tears are because I am moved by the overwhelming presence of God that shines through every human life.

the compassion of God in nurses and doctors and aides in the hospital and the nursing home,

the hope of God in those who were ill and took that trip to Las Vegas anyway,

the steadfastness of God in those who were quiet and reliable and humble,

the face of God in caretakers who sat present in the middle of the night,

(What I like to call) The Spunk of God in an ornery Grandmother who while her body failed remained funny and full of faith,

the redemption of God in the father who endured an abusive childhood and who chose a better way – attested to by the sons whose eyes beamed with love as they told me about him,

the very presence of Christ in the holy communion of Diet Coke and doughnuts that a husband brought to a nursing home on Sunday mornings for 14 years after his wife was disabled by a brain aneurysm.

This is not even close to everything. It’s not even close to all the ways I have seen God in holy moments of remembering with families. It’s the holiness of a whole life’s story of struggle and loss and heartache and also triumph and strength and hope.

All of it is a sign and a promise of God’s sanctifying presence – an unbroken line between God’s love in this life and the next.

May we see it!

1) Sanctification means that God never leaves us the same. How has your life changed because of your faith?

2) Have you ever seen the presence of God when reflecting on the lifetime of a loved one? What did you see?

3) When your life is over, how do you think people will see the presence of God in you when they tell your story?