The song that was sang during Children’s Time (“Do You Really Love Me?”) comes from the deep recesses of my Catholic childhood. I think of it every time we encounter a bible passage about sheep. I think I remember it because it really pulls on my heartstrings. That’s because of its connection with a previous story about Peter in the Gospel of John.

Today’s scripture is from the last chapter of John, after the resurrection. But a few chapters earlier, there was this incident where Peter denied Jesus three times. He knew Jesus was going to be crucified, and he didn’t want to be arrested himself, so when people asked Peter if he knew Jesus, Peter denied it. He said he didn’t know Jesus.

I can’t imagine the shame and regret Peter must have felt about that.

Then, when Peter is forgiven and redeemed, Jesus says this: “Feed my sheep.” 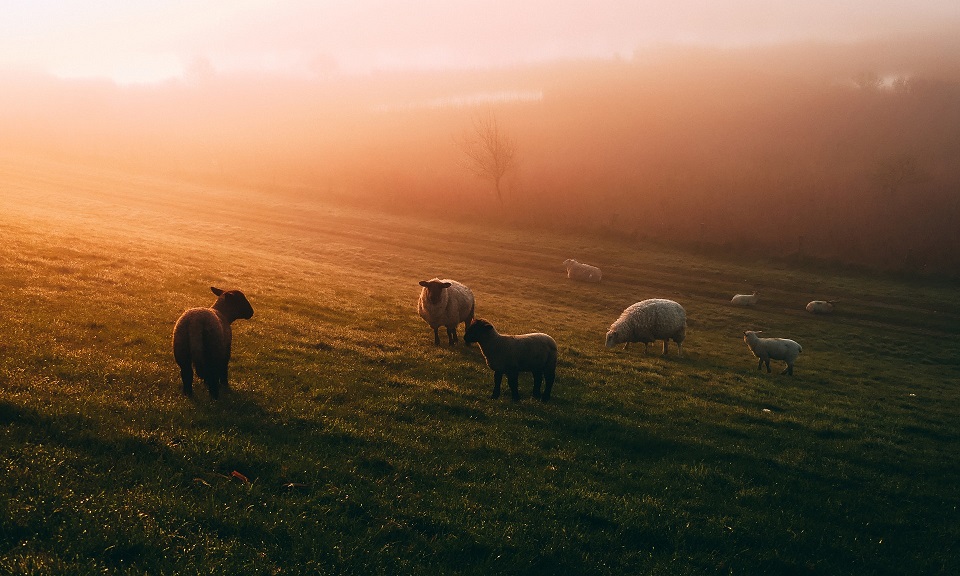 I don’t think we need to know a whole lot about sheep to understand what Jesus is saying. Here’s how I see it. When Jesus says, “feed by sheep,” he’s saying this: “Take care of my people. Love the people I love. Make sure none of my beloved children are left out or left behind or lost.”

That doesn’t sound so hard, right?

When I hear this part of the story, I feel like it’s a call to the biggest and riskiest insistence on caring for all people. It calls me to see all people – literally all, not the just the people I know or people who look like me or people who happen to worship at this church – but all people – as the people Jesus wants me to love. So that moves me to speak out about all kinds of thing, even when it’s uncomfortable, or I’m worried people might disagree.

Now, friends, here is the part where I threw out the last five pages of my sermon this morning. See, I wanted to preach about these two paths of discipleship – one big and risk-taking and one quiet and faithful…and I kind of wanted to give you an out. I wanted to say, that yes Jesus calls us to take risks and sacrifice so that others can live and thrive, but if you just want to be kind to your neighbors, that’s good too.

To be honest, I wanted to give myself an out not to push too hard here.

But when I hear the story of Peter and Jesus saying, if you really love me, you have to risk your very life…well, I think it requires me to speak out. Requires me. Because I want to be the Peter who loves Jesus and not the one who denies Jesus.

We had three mass shootings in our country this week.

Two of them were motivated by racist, anti-immigrant sentiment.

As I wrote my sermon, I had this ridiculous, disgusting, absurb math tally at the bottom of the page. How many more killed this week? How many more injured this week? And this morning when I had to add to the numbers again…it was too much.

At least that many.

What is wrong with our country?

A pastor friend of mine, Rev. Fernie Rivera, wrote about it on Facebook. I share it with permission. I met Fernie at the training in Ohio I attended (ironically, in Dayton where the other mass shooting last night occurred). He is from El Paso, went to the Lydia Patterson Institute, is a friend of our summer intern Brayan Martinez.

Fernie, (Rev. Rivera) writes this: “I will be honest, I have remained quiet for a long time because I never wanted to make anyone upset. But this time it hit home. This time it affected my family. This time I can’t say nothing again.

I don’t know the solution, but pointing fingers in order to protect our preferences is not the answer. To my friends on both sides of the aisle, when will we make the kingdom of God our biggest priority before our loyalty to our political party, organizations, or even or country? When will we as Christians actually make bringing about the kingdom of God our biggest priority?

I can’t help but think of the many times Jesus cried out for people. When his friend was dead, when he was in the garden, when he was on the cross. But at the heart of every tear, Jesus had complete trust that God would not be defeated by death.

Tonight I weep. I ache in fear of the news that is left to come out. But tonight I also trust that God will not be defeated by death like the one my hometown experienced today. Today I turn to God. And today I choose once again to play an active role in bringing about the kingdom of God…

In solidarity with Fernie and El Paso and Dayton and Gilroy, with Parkland, with Orlando, with Las Vegas, with Charleston, with Pittsburgh, with Sandy Hook…

I could go on and on.

In solidarity with every beloved child of God who has been lost because we love violence more than life; I weep, and I pray.

Sometimes when I read scripture, I find myself unexpectedly moved by something I’ve read before. This week, it was the end of our text that struck me in that way. Here, I am reading along, (I’ve read the Gospel of John before) and I get to this line:

“There are also many other things that Jesus did… if every one of them were written down, I suppose the world itself could not contain the books that would be written.”

I read that, and I was filled with hope. Jesus has done so much! And His love will fill the whole world!

Then, as the week wore on, and all these shootings kept happening, I was filled with despair. If Jesus has done all of these things, why so much violence?

And then I heard Jesus’ voice, saying to all of us: “Feed my sheep.”

I believe. I believe that the day will come when the world will be filled with the stories and presence of Jesus who is love and life and peace.

But we need to feed Jesus’ sheep. We need to do our part to build the kingdom. We need to love Jesus more than we love ourselves. We need to see every person as Christ’s own beloved – and be willing to speak out and sacrifice for them.

And we need to get to work – until not one more sheep is lost.