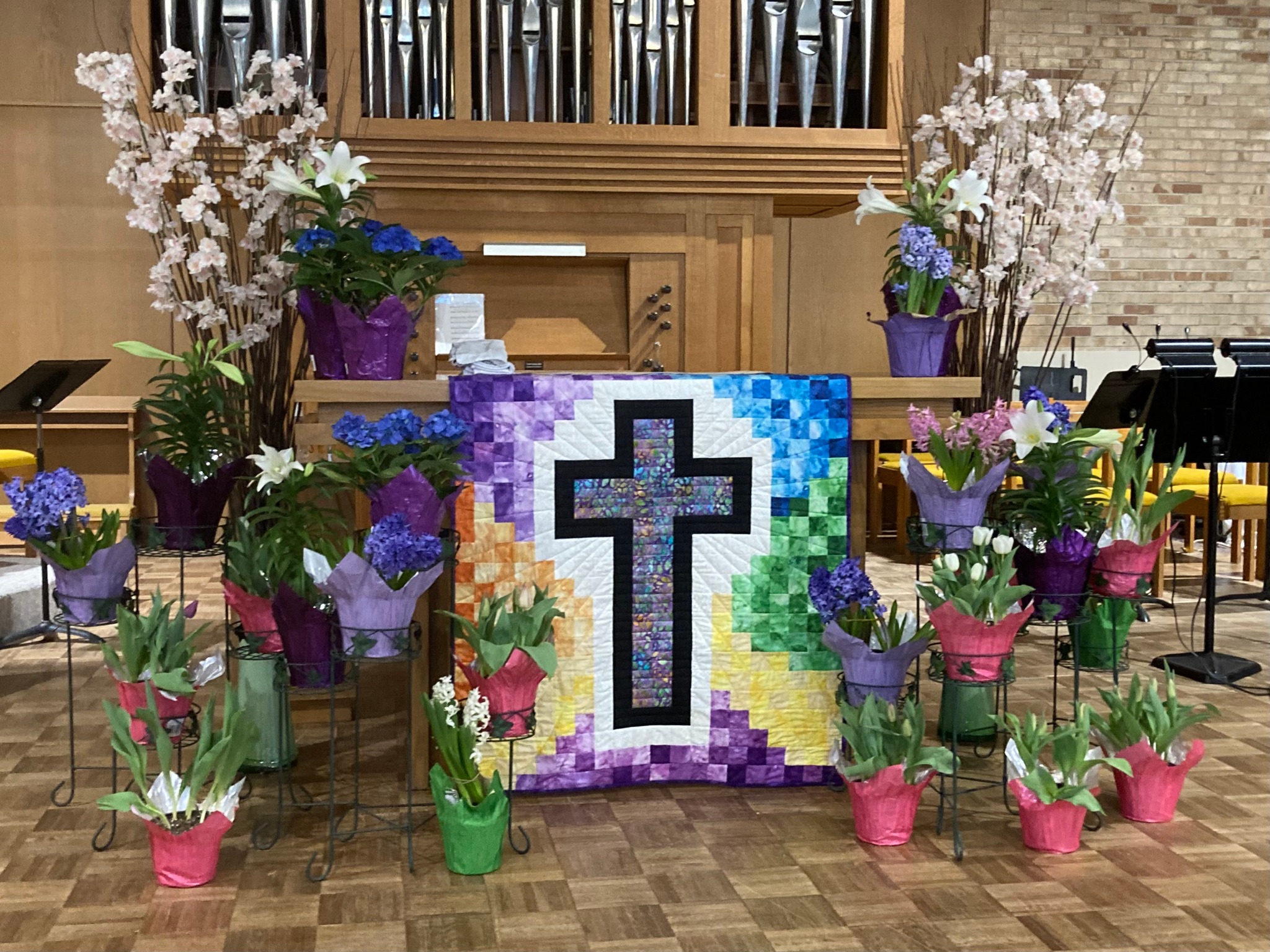 In seminary, one of my professors was the Rev. Dr. Melanie Johnson-DeBaufre, or as everyone affectionately referred to her, MJD. Now I never had a class with MJD, but in seminary, even the conversations you have in the hallway or at lunch can include the topic of the resurrection of Jesus. In one such conversation, MJD (who is a renowned New Testament scholar) talked about how hard it was for the disciples to recognize Jesus after the resurrection. It led her to believe that the post-resurrection Jesus must have looked or seemed very different to people.

It led me to start thinking about this as well. To start, in the Gospel of John, Mary Magdalene meets up with the Risen Jesus and thinks he is the gardener. Now Pastor Peter and I had a long conversation about this on a Thursday one time. I said to Pastor Peter, “So, Peter, I’m not going to see you between now and Sunday. That’s even more than the three days that Jesus was in the tomb. Do you think you will recognize me when you see me on Sunday?”  Pastor Peter agreed that he probably would recognize me.

But Mary, one of his closest disciples, did not recognize the Risen Jesus until he said her name.

In the Gospel of Matthew, when Jesus shows up to the 11 disciples to give them the Great Commission, it says that “some doubted.” The Risen Jesus was standing right there, and some doubted.

In the story just heard from the Gospel of Luke, again it is about three days after the crucifixion. Jesus shows up, he is walking along with his friends, and they think he is a stranger. They are even talking to Jesus about Jesus. They are telling him about himself, and they can’t figure out it’s him.

These disciples only recognize him in the breaking of the bread. The text reads, “30 When he was at the table with them, he took bread, blessed and broke it, and gave it to them. 31 Then their eyes were opened, and they recognized him.”

Clearly, the Risen Christ can be hard to see. This, I think, is why we continue to break bread. We continue to celebrate the sacrament of communion. Somehow, miraculously, it gives our eyes and hearts a chance to see that God really is with us – even now.

As you know, sometimes it can be a challenge to celebrate communion. It was hard during the height of the pandemic. Remember back, over the past two years? We had to figure out communion whatever way we could. Gather-your-own elements at home, bread and grapes outside, pre-packaged elements eventually. We saw Christ in a new way as we took the elements streaming or outdoors or in our pews. In those dark days of the pandemic, the Risen Christ was hard to see, but we took communion.

Today we finally…(finally!) return to taking communion in the way we are used to. We will come forward from our pews. You will receive bread and dip it into the cup. But for those of you who are especially vulnerable to Covid or other illness, perhaps that doesn’t feel right for you. The pandemic taught us we can take communion in different ways. So we will have a basket of individual elements if you prefer. We will have a gluten free option as we always do. We want to do everything we can to invite everyone to experience the Risen Christ here.

Funny story – there was an unexpected side effect of the pandemic. How many of you know about King’s Hawaiian Bread? Show of hands. So we used to serve the big round loaves for communion. You remember those, right? Well, a couple months ago, I go to the United Methodist Clergy Moms Facebook Page, and I see a post about how someone can’t seem to find any big loaves of King’s Hawaiian Bread. I do my own research. I talk to Hyvee, and I come to find out that the King’s people have discontinued it! Apparently, no matter how many distraught Methodist pastors have pleaded with them via their website feedback form (including myself), it is not coming back.

So now I’ve got a situation, right? The pandemic is waning, Easter is coming up, I’ve got no King’s Hawaiian bread. And yes, I know you can still get the rolls, but can you imagine how ludicrous that would be? The communion servers would never forgive me.

About a week after that bad news, it was time for us to go shopping to buy items for the All People’s Pantry. In case you haven’t heard, the All People’s Pantry is a culturally appropriate food pantry we started here at Hanscom Park church. See, there are many traditional food pantries in Omaha, but they are limited in the types of food they offer. That’s because the free food that comes from food banks tends to be very stereotypically American foods. So while there are many food pantries, there are almost none that stock the kinds of foods that are eaten by many immigrants and refugees.

So this church (we all) decided to put in the extra effort and collect items specifically needed by New Americans: things like cassava flour and every sort of bean imaginable, dried milk powder, palm oil…there was a whole list of items we collected. We’ve had one Pop-up Pantry so far, and at that pantry, we had 72 volunteers. Those volunteers, who gave out the food, they originated from 8 countries. We welcomed 105 guests, serving 479 people in their families. Those guests were from 25 countries and 27 zip codes.

One of the places we got the food from was a small grocery store called African Farms. We purchased food there because we wanted to support immigrant and refugee entrepreneurs (like our friend Felix) as we were providing free food to folks in need. Well, we went shopping as a group one Sunday after church, and I was wandering around just kind of checking out the various foods. Suddenly, a light from heaven broke through and illuminated a shelf with about 20 loaves of Nina’s Sweet Bread. Okay, so there wasn’t a light from heaven, but I saw this bread, and I picked it up and squeezed it a little, and I thought “I bet this is just like King’s Hawaiian Bread.” Friends, if I didn’t tell you this, and if you didn’t see that it is a rectangle loaf instead of a round loaf, I suspect you might not even be able to tell the difference.

So that’s the bread we will use in communion this morning. It is made here in Omaha by a Togolese American woman named Nina. It is bread I never would have found if we weren’t out in the community connecting with our New American neighbors and being people in mission to love and empower and serve folks in need. There was the Risen Christ. Right there in African Farms.

Now that’s just a small thing, but the presence and power of the Risen Christ in communion has been revealed in much more profound ways. The Risen Christ that we encounter in communion is so real and so threatening to corrupt people that the Archbishop Oscar Romero was assassinated while presiding at the communion table. He died right there for condemning state-sponsored torture and murder in El Salvador. But it did not stop the people of El Salvador from taking communion the next week. Romero could be killed, but the Risen Christ could not.

When war broke out in Ukraine in February, it did not stop the faithful from taking communion. In a video message, the Roman Catholic Major Archbishop of Kyiv begins, “Greetings from Ukrainian Kyiv! Today is Sunday, 27 February 2022. We survived yet another horrible night…[but after night] there comes day, there is morning. After darkness, there comes light, just as after death there comes resurrection, which we all today radiantly celebrate.”

The Archbishop in his message continues by saying that Ukraine believers will celebrate the Risen Christ even though the residents of Kyiv will not be able to go to church. That’s because the government had mandated a curfew that ordered everyone to stay at home because of the threat to their lives.

The church is with its people, and Christ is made known in the breaking of the bread. Here. In Kyiv. Perhaps even in Russian churches, the Prince of Peace will be made known. Perhaps hearts will be transformed. Perhaps war will cease. God only knows.

But we do know this: there are Ukrainians celebrating communion today. We celebrate with them. If they can see the Risen Christ, if they can claim the hope of resurrection at the table, so can we.