Are you afraid of angels?

Let’s see that picture of those sweet angels, A/V Team. 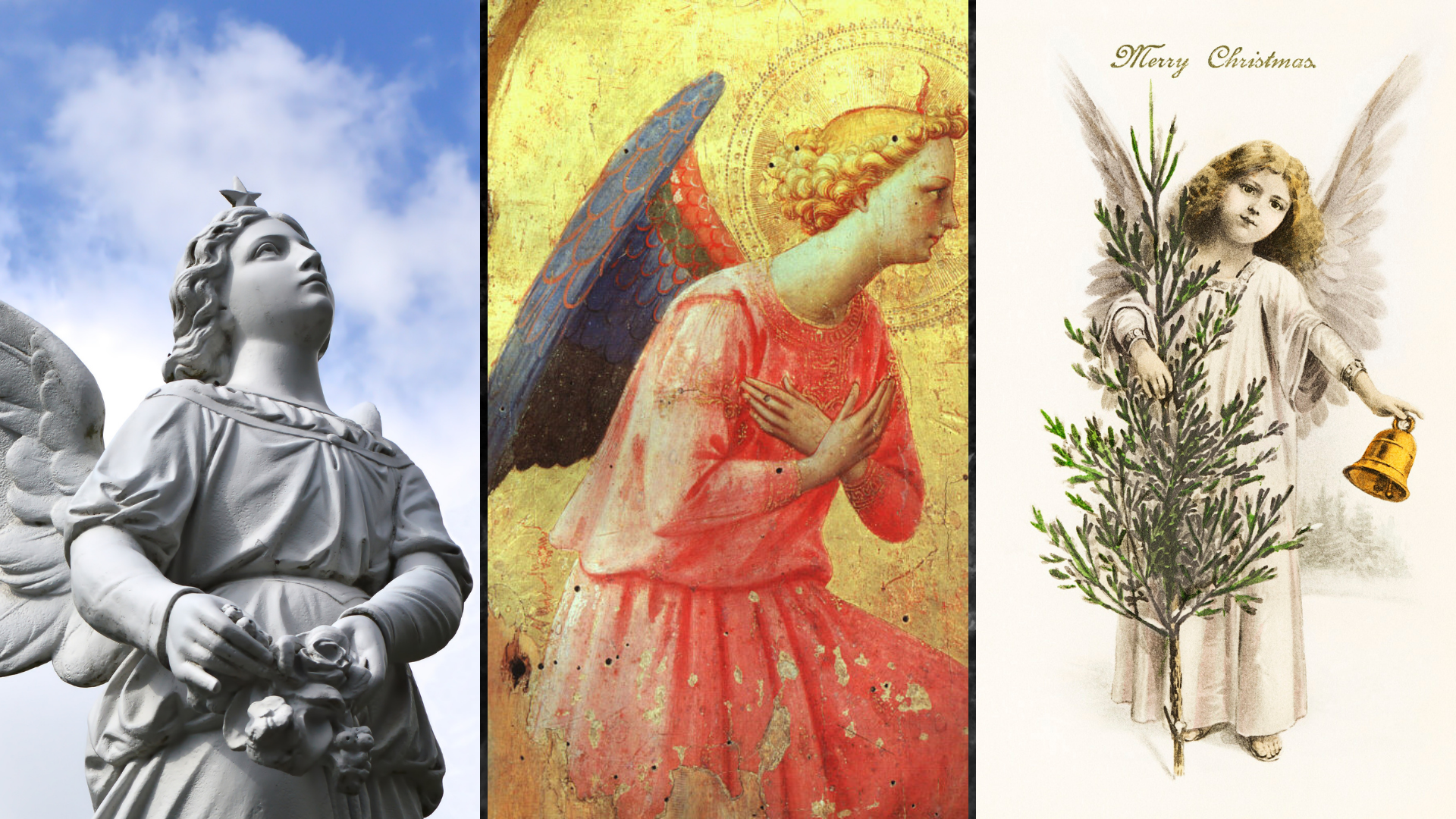 These are sweet angels, aren’t they? All devout and tender and gentle?

Tell me, when you think of an angel, is this kind of what it looks like?

Yep, those are some sweet little angels. Yet when the Angel Gabriel shows up in today’s text, what is the first thing he says to Zechariah? “Do not be afraid.” In other translations, “Fear not!”

Gabriel is also not the only scary angel in this Gospel of Luke. The angels that appear to the shepherds to announce Jesus’ birth also terrify them. They too start their angelic message with “Fear not!”

I think this can only tell us one thing: that angels – real, actual messengers of God declaring God’s will and purposes for our lives –  must be pretty scary.

You know, I always imagined angels to be similar to the pictures we just saw until I was a member and then student-pastor of Church of the Village in New York City. COTV (that’s what we called it) has an amazing Christmas pageant. It is intergenerational. There are actors and readers and dancers of all ages. There are even tiny and grown-up tap-dancing sheep. [Oka, they are people, dressed as sheep.] 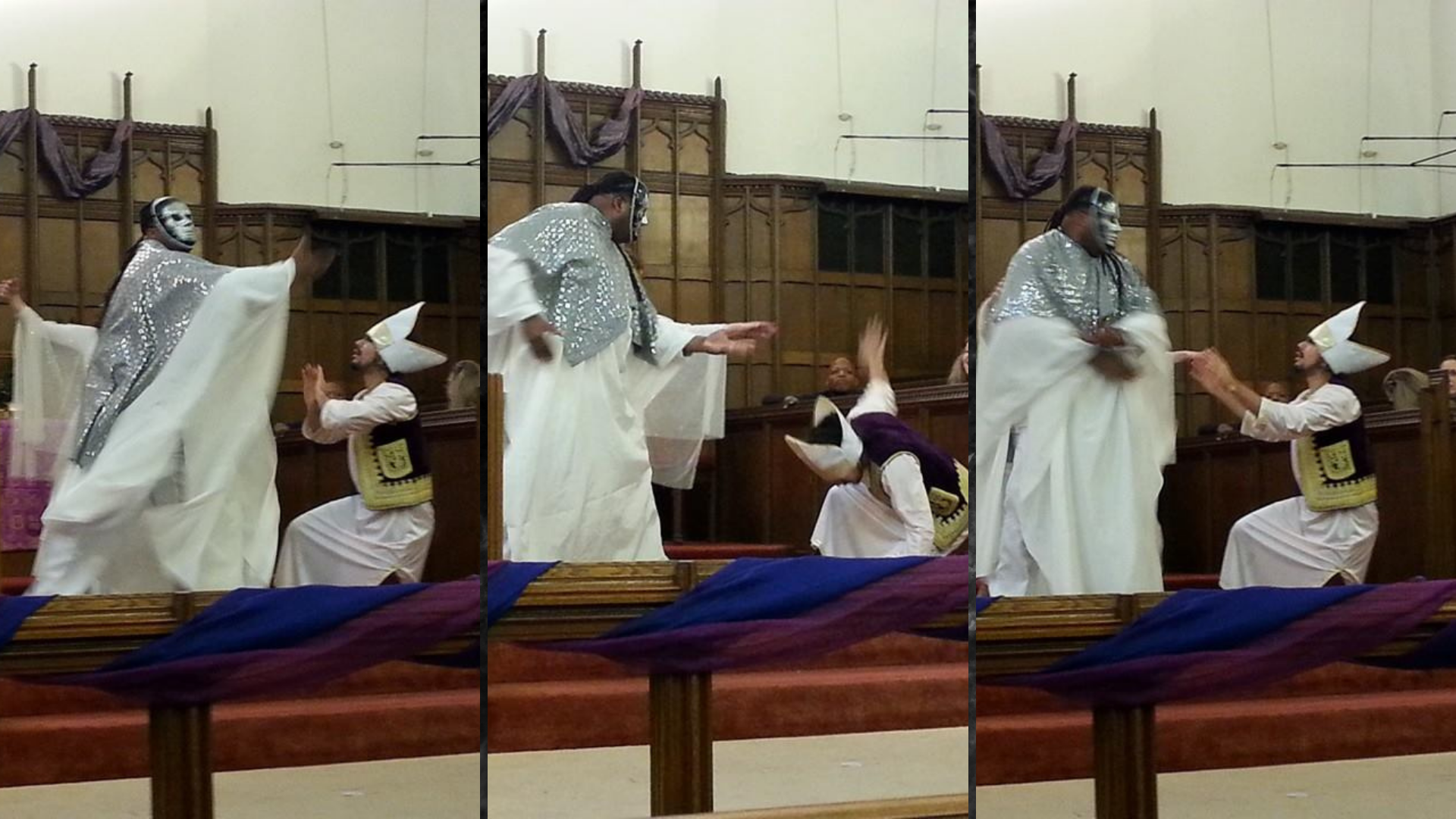 This is Nathan Bunce. When he’s not playing Gabriel, he is a great guy, a real sweetheart with a megawatt smile. But when he’s playing Gabriel, he is an angel that is not to be trifled with. In this scene, Gabriel is responding to Zechariah who has just questioned the good news the angel told. Gabriel was like, “Zechariah. Your wife is going to have a baby who will prepare the way for Jesus who will be the hope of all people.” Gabriel goes on with some details about this, but Zechariah does not quite believe him. He says, “How will I know that this is so? For I am an old man, and my wife is getting on in years.”

And Gabriel responds, “I am Gabriel, and I stand in the presence of God.”

Then he strikes Zechariah mute.

I have never thought of angels the same way since then.

Zechariah is afraid and doubtful when he encounters an angel of the Lord. See, he had been going about his priestly duty in the sanctuary, and maybe it had been a long time – maybe it was even the first time – this ritual had been interrupted by the actual presence of a divine messenger. Maybe Zechariah had gotten comfortable with his life and his family and his predictable priestly duties. Maybe he had accepted that this was going to be it…his wife wasn’t ever going to have a child…he would just continue this routine of visiting the temple week after week and year after year.

But all of a sudden, Gabriel shows up and drags Zechariah with all his fear and all of his doubts into God’s story of the restoration of all of creation. He goes from being the guy who sits in the pew and occasionally gets chosen to come forward and light then incense to the guy who has been cast as an invaluable character in God’s drama of salvation.

Did you hear that? It’s not just Zechariah and Elizabeth who are being dragged into this drama of salvation. They are not the only ones who have entered the eschatological transfer portal. We have, too. You, too, have a role to play in transforming the whole world into a place where we turn back toward God and then give our very lives for one another, especially the most vulnerable among us. You have a role to play, and there are no minor roles in God’s story.

How do you feel about that? Are you doubtful? Are you terrified? In fact, like Zechariah, we might even open our mouths to try to make some excuses about why this cannot possibly be true: like, “No, God, you cannot possibly be asking me – or us – to be part of salvation history.”

Zechariah’s response was, “Wait now. I am old. My wife is old. How is this ever going to work?”

Gabriel responds to Zechariah’s “I am old” with this: “I am Gabriel, and I stand in the presence of God.”

Let’s hear that again. Like, sure your objections might seem pretty compelling, Zechariah. You are old, your wife is getting on in years. This plan seems very unlikely to come to pass. But “I am Gabriel, and I stand in the presence of God.”

Then, for good measure, Gabriel renders him mute – effectively making it so that he cannot utter any more doubts or excuses. Interestingly, Zechariah’s lack of speech is what shows the people who are outside that he has seen God. His mouth is no longer filled with doubts about whether this role in salvation is for him. He has been struck silent and compliant to (put it crudely) shut up and do his part in God’s mysterious and amazing work.

We (you don’t want to be brought into this, do you?) are being called to do our part as well. We are part of God’s mysterious and amazing and scary work of salvation. Zechariah was part of the story right at the beginning, parenting the child John the Baptist who would prepare the way for Jesus. Jesus came and loved and lived and healed and taught and died and rose…and here we are 2,000 years later players in the same drama. We are somewhere between the incarnation of love and justice in Jesus…and the fulfillment of peace and love and justice and joy when Christ reigns fully among us. We all have a part in that story.

And we’ve got lots of excuses.

Maybe it’s like Zechariah: I am too old for this.

Maybe it’s my favorite: I am too busy. Or my most honest excuse: I’m afraid to take a risk.

What’s yours? I’m tired? I’m broken? I’m not good enough? I’m not holy enough to be part of God’s story?

We are too small.

We don’t have enough money.

We have never done that before.

Friends, every one of those excuses is met with this: “I am Gabriel, and I stand in the presence of God.”

May we, like Zechariah, be silent with the excuses…and let God work mightily through us.