I am so excited to preach about this scripture. This is definitely one of my favorite stories in the gospels. It starts by telling us that Jesus was on the move. He was walking along. As he walked, he sees a man who had been blind since birth.

Jesus’ followers see him, too. Immediately, they ask this question, “Teacher, who sinned, this man or his parents that caused him to be born blind?” Now this was a reasonable question given their first-century worldview which assumed that physical or mental illness was a result of someone’s own sin or shame. This was something they should be held accountable for, something they sort of deserved.

So Jesus’ answer, which we moderns think is just reasonable, common sense, would have surprised his followers. He tells them, “Neither the man nor his parents sinned.” Instead, Jesus says, “He was born blind so that God’s works might be revealed in him.” Biblical commentators are quick to point out that Jesus does NOT say, “God made him blind so that God’s works might be revealed.” Rather, Jesus beholds the man’s suffering and need, and identifies that suffering as an occasion to show people the healing and restoring glory of God.

Then Jesus tells his followers that they must get to work healing this guy. He says, “We must work the works of him who sent me,” right here, right now. Now, I should probably tell you that different ancient sources report what Jesus said here differently. Some sources change that first “we” to an “I.” Those sources make this statement ALL about Jesus. Jesus is the one who is going to work the works; the disciples are nothing but spectators really. But the translation that the New Revised Standard Version picks uses the “we.” It draws Jesus’ followers into the work. Scholars debate this, but the four scholars I read this week argue in favor of the “we.” So we’re going with it. Jesus says, “We must work the works of God.” Like, right now. 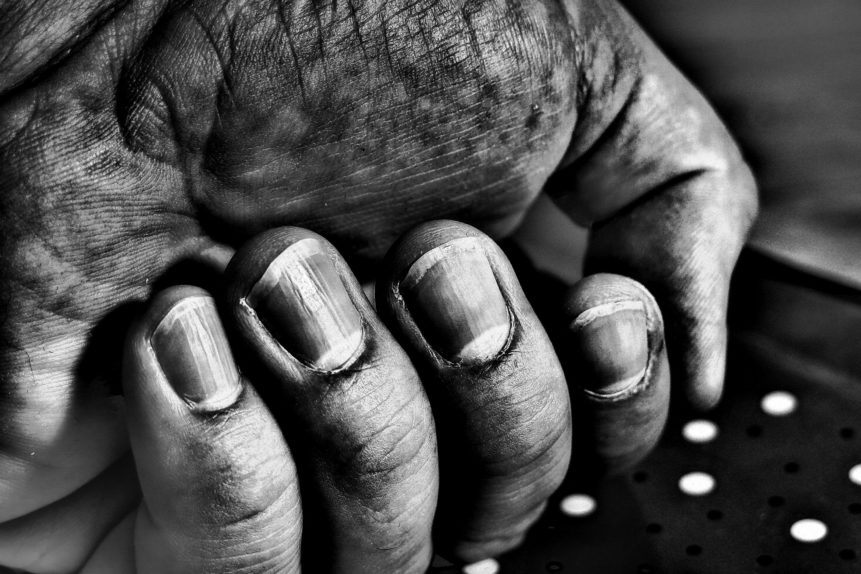 And did you hear what Jesus does next? (This is why I love this story so much.) He spits. He spits on the ground. Then he reaches down and makes mud with his saliva, and he spreads it over the man’s eyes.

I love the messiness of this. I love it especially because it seems so unnecessary. I mean, in John chapter 4, Jesus saves a little boy’s life without even bothering to go to the boy’s house. He just tells the father, your son will be healed, and it was so. In that story, Jesus is kind of removed, healing through these distanced words. He is very far away and abstract to the people he helps.

But that’s not the Jesus we see here in John 9. His spitting in the mud and making the paste has him looking more like a folk healer than a God-man who is kind of above it all. He gets down in the muck with this man so that the man might be healed.

His healing doesn’t happen just because of Jesus’ mud pies though. Jesus puts the mud on the man’s eyes and then tells him to go wash in the pool of Siloam. Now that author of John stops here to make sure we don’t miss the translation. He adds into the narrative “Siloam (which means Sent).” Like – hello! Look at what I’m saying here! We are not to miss that the man is SENT to participate in his own healing. He has to wash his eyes himself in this pool in order to see.

Yet he is SENT in another way as well. Once he is able to see, he goes back to his village. Jesus must have moved on. The neighbors see the man. But they don’t talk to him at first – they talk to one another like he’s not there, “Is this not the man who used to sit and beg?” they ask each other. Some say, yes. Some say, no. But the man is right there! I imagine this scene being kind of funny. These villagers talking to one another like, “Is it the man, really?” “Well, I’m not sure.”

All the while, he’s like jumping up and saying, “Hello!! I AM the MAN!” (Who’s not seeing now, right?) So eventually they pay attention to him, and they are like, “Well then, how were your eyes opened?” And the man tells the whole story. He says, “The man called Jesus made mud, spread it on my eyes, and said to me, ‘Go to Siloam and wash.’ Then I washed and received my sight.” Now these villagers are listening. They say to him, “Well, where is [Jesus] now?” The man answers, “I don’t know.”

One of the commentators I read this week, Cynthia Jarvis, pointed out that sometimes our encounters with Jesus, with God, are like this. She writes, “How often is this the case with faith? Light shines in the darkness, a moment of understanding is given, and then we are on our own to make sense of the gospel in a hostile world.” [1]

This world is hostile to the gospel for so many reasons. We can see a glimpse of it in how the disciples reacted. When presented with a suffering person who longed for healing, they went right to blame. They wanted to spend time talking about and thinking about what this person had done to get themselves in this situation. Maybe they were looking for a way to justify not getting involved. This man (or his parents) must have done something pretty bad for him to end up in such a rough spot. It’s his own fault he’s suffering. Let him figure it out himself.

I don’t blame the disciples for responding this way. I get it. When you see something that’s a difficult problem, it’s easy to not want to get involved. I mean, we’ve got so many pressures and responsibilities going on with our own jobs and our own families. It makes sense that when we see someone suffering, it gives us some relief to be able to look at them and think, “Well, they made their bed. They are going to have to lie in it because I have my own problems to worry about.”

I mean, I do that sometimes. I look away and don’t want to get involved because I know if I do, it’s going to be a mess. You know how I know that? Because humans are a mess. Have you met humans? Humans are just messy. Trying to do anything with another human being, or Lord have mercy, a whole bunch of other human beings…it can be a big mess!

I mean, look at what Jesus had to do…spit in the mud! Touch the person who wanted to be healed, getting right there in mess with him. And then, then! Then Jesus had to trust the man to do the right thing – to participate in his own healing, to participate in his own liberation. Jesus knew that the efforts he put into healing the man might come to absolutely nothing if the man didn’t do his part. That didn’t stop Jesus though. He got down there in the mud with the man, and then he empowered him. Then he told him: “I did what I can, now here’s what you have to do to be part of this healing.”

And you know what the man did? He did it! After his encounter with Jesus, he participated in his own healing and liberation, and then he was SENT. He was sent out to tell others what Jesus had done for him.

It all started with a person who was suffering. Healing him was a mess.

But this mess was an occasion for the glory of God to be revealed.

This church, this local Hanscom Park United Methodist Church is a mess right now. Like, literally. Just out of the wide view of our sanctuary cameras, there are clothes and furniture, gardening tools (some of which frankly look a little dangerous), toys, knick knacks, all sorts of decorations, I don’t even know all what is out there. It’s a mess.

But throughout this week, there will be a whole team of people who move and organize and clean stuff. They will work so hard, and there will be a place for everything and everything in its place. This year, they are working even harder than usual because they are planning sanitation and routes and crowd control so that we can do this Garage Sale and Craft Fair while caring exquisitely for our community by NOT spreading the coronavirus. It would have been easier to just chuck it this year. It also would have been easier to do it recklessly – and not worry about distancing protocols – and hope for the best. But our team chose the hard and healing route of getting involved and getting into the mess.

And the glory of God has already been revealed from this mess! I heard the MOST laughing in this church that I think I’ve ever heard as our first team started organizing things this past Thursday. And the glory of God will be revealed from this mess, as we raise money for our children’s ministries and for the global mission of the United Methodist Church.

And the glory of God will be revealed even more when we select items that will be part of an outdoor “clothing closet” for New Americans that’s happening the week after the Garage Sale. At that event, in partnership with a number of other organizations, we are going to give away diapers, school supplies, children’s clothing, cleaning supplies, personal care items, and fresh vegetables from our garden – all out on the very lawn where we worship.

This physical mess is an occasion for the glory of God to be revealed. When Jesus says that WE must work the works of God, that means us. That’s gonna be us!

That’s what we do as well. We enter into the work of revealing the glory of God as redeemed messes ourselves, and when we show love and compassion and generosity to others, we show them no less than what saved us first. We – each of us – have been the man born blind. Each of us, in our own way, on our own journey…we have encountered Christ. We have been healed and liberated and SENT to do God’s work in the world.

This mess has been an occasion for the revealing of the glory of God.