So last week my friend and colleague Pastor Debra preached here at Hanscom Park, and this morning, through the miracle of technology, I am actually preaching this week at Urban Abbey as well. They record their services on Thursday evening. What I told our friends at the Abbey and what I will tell you is that Pastor Debra threw me under the bus with this Gospel of John passage this week. When we were looking at which of us would preach which scripture, she was like, “You get the Gospel of John! I’ll take the Parable of the Lost Sheep!” Kind of like when someone yells “Shotgun!” as they push you into a snowbank on the way to the car. 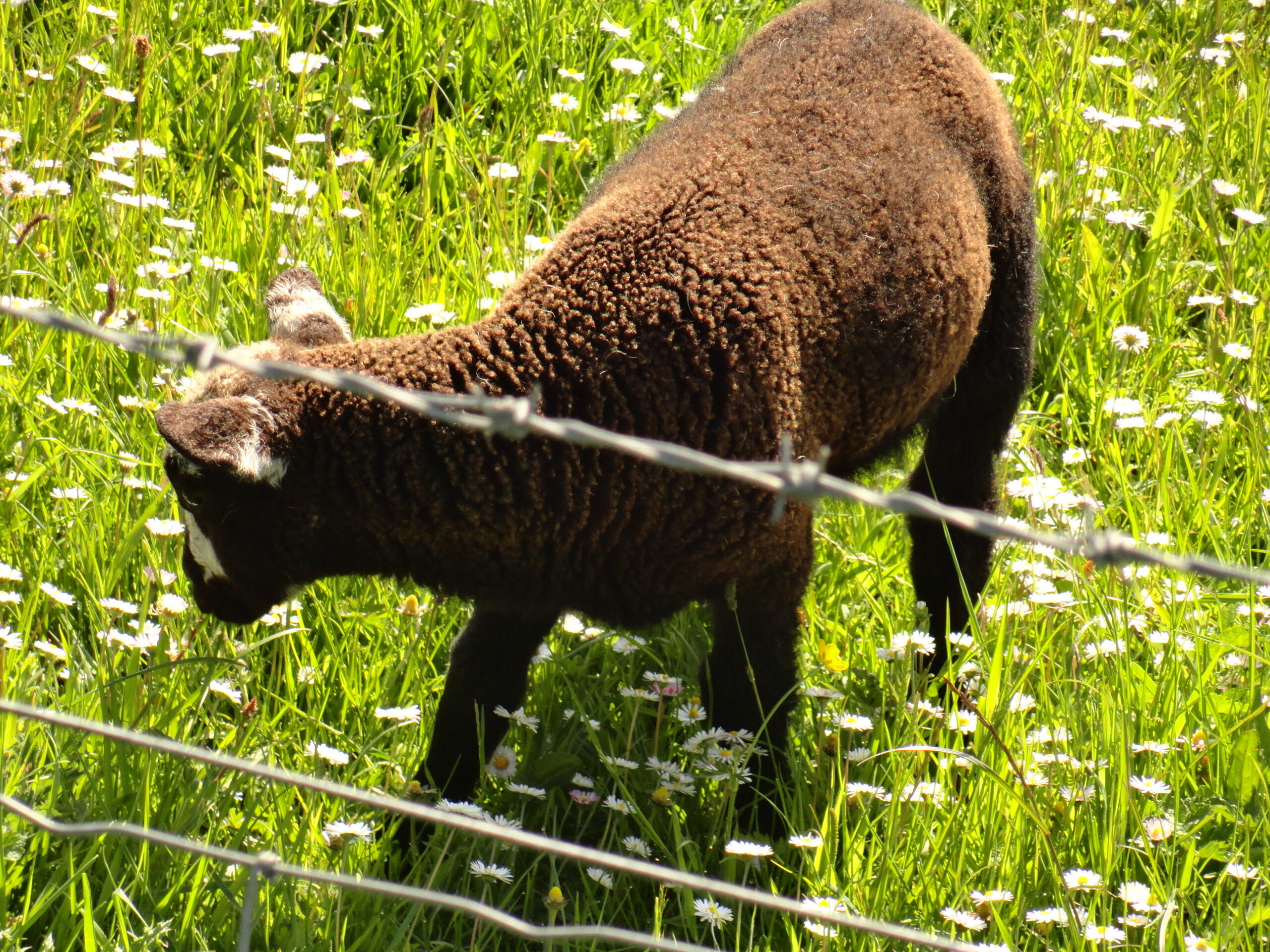 I was like, “Sure, I love the Gospel of John. I’ll preach on John 10.” Then…as I wrestled with the scripture this week, I began to understand Pastor Debra’s enthusiasm for avoiding it. Not only is it a fairly theologically complicated text, I became aware that it the kind of text that probably helped drive me out of the Christian church for a good 15 years of my young adulthood.

See, I had grown up in the Catholic church, and I went to a Catholic grade school, and I’ve talked about this in sermons before…that I don’t remember any particular person telling me that I was going to hell if I didn’t act right or believe right, but somehow I got that message very clearly. AIso, I distinctly remember this feeling that every time someone bad showed up in the scripture, it must have meant ME.

Like in today’s scripture, for example, I want you to imagine a scene like this one from my childhood. It’s 1982, and there’s a little girl with dark hair and blue eyes and a fairly unfortunate bowl-shaped haircut, outfitted in a black watch tartan jumper and knee-high navy blue socks. Now, this may have been a SIN against fashion, but I’m fairly sure she was not doing anything else terribly morally objectionable during second grade.

And she hears the scripture, and it says, “Anyone who does not enter the sheepfold by the gate but climbs in by another way is a thief and a bandit.”

And this little girl thinks, “Oh my gosh. I am a thief and a bandit. I am not following the rules right. I’ve been told this is a very narrow gate, and I’m trying to CHEAT by climbing over the wall. I am going to hell.”

Now… little Chrissy did not tell anyone she was interpreting this scripture that way. But she was. Because of her imagination that God was pretty much just looking for reasons to send 7-year-old Catholic school girls to hell, Chrissy assumed the worst.

Like I said, I don’t remember any of the priests from my childhood saying this. One of them I remember, Fr. Jim, was always quick with a smile and a gentle word. And while I did have a genuinely terrifying 3rd grade teacher named Sr. Cyril Marie. But, I was sort of the teacher’s pet with her, and I feel affection for her even now. The reason I am saying this is that I don’t think this is a particularly Catholic conception of God. In fact, the evangelical church I attended briefly in high school with my friend Sally seemed to have a God that was also trying to send Catholic school girls to hell…but this God was doing it because they were Catholic, which was, to them, not the right way to be Christian.

So by the time I got to college, I was pretty much done with this God who supposedly was looking for a reason to send us all to hell for being thieves and bandits and faithless “hired hands.” None of it made any sense to me. Why, I wondered, if God is a loving, good shepherd, would He be so hell bent (pun intended) on sending anybody who didn’t say just the right words or do just the right things or practice to the right flavor of religion to eternal torment? I’m supposed to believe this is a God who loves us? This sounded like a load of BS made up to control people, at least to the ears of 18-year-old Chris.

So I gave up on Christianity.

It is a shame that I would have somehow picked up this genuinely warped reading of this beautiful text, this beautiful religion of the Good Shepherd. So here’s what I want you to know, and I share this for Catholic school girls and guilt-laden Christians everywhere: when Jesus criticizes people in the scripture, he is not always talking about you.

In this particular scripture, John 10, these thieves and bandits and hired hands are not just average folks trying to follow Jesus. We need to read this scripture in context. See, in the previous chapter, John 9, Jesus has just had a confrontation with the religious authorities in his community. They were mad at him for – get this – healing a man’s hand on the sabbath.

So here in chapter 10, Jesus is still thinking about these religious authorities. He is saying that religious authorities who would deny a suffering person healing (just because it was the sabbath) are thieves and bandits…in other words, leaders who don’t really care for the sheep.

These leaders are willing to hurt and destroy the sheep in order to maintain their own power or their own sense of self-righteousness. These false leaders are kind of like the bad shepherds from Ezekiel 34 that we heard about a couple weeks ago. In fact, Jesus is probably saying they are worse. These religious authorities are not just bad shepherds. They are more like thieves who would steal sheep, as the text says “steal and kill and destroy.” Author Kenneth Bailey writes that this is literally what happened to stolen sheep. The thieves didn’t nicely take the sheep out to some other pasture. Oh no. In order to hide their crimes the thieves would kill, butcher, and sell the sheep for meat. So the sheep can’t be identified. Yikes.

So, to clear this up for all the little Chrissies of the world, here’s the deal. This scripture isn’t a warning about God sending us to hell. It’s a warning about the danger of following leaders who don’t care about you. It’s a condemnation not of sheep but of those who would hurt the sheep for their own selfish reasons. This is more a criticism of the theology that drove that little girl, who loved Jesus so much she thought she might become a nun someday, away from the Good Shepherd and out of the church.

The rest of the passage is a meditation about how much the Good Shepherd cares for his or her sheep. These dual statements of Jesus, when he says, “I am the Gate” and “I am the Good Shepherd who lays down his life for the sheep” – neither of them are about a narrow path to salvation. They are about God’s extravagant care for us.

Jesus is not the gate to keep us out. He’s the gate that keeps us safe when there is risk, when we need rest. And he is the gate that opens up and then leads us out into green pasture where we can live in abundance together. Because he is also the Good Shepherd.

Now, if I may get theological with you for a moment, this text does invite us to see God and Jesus as one. This text is thoroughly incarnational in the orthodox Christian sense. God and Christ are One. They are inseparable. Fully human and fully divine – and God gives Godself to the world because of love. Jesus here, alluding to the crucifixion, takes a moment to clarify that his sacrifice of himself is done of his own accord, of his own will which is one with the Father’s will.

There is no coercion. This is not an abused son trying to assuage an angry father by agreeing to be punished for our sins. No, this is a loving child, whose love for the world is one and the same as their loving Parent, who freely chooses to lay down their lives for the good of the sheep.

Now, I know that an affirmation of the oneness of God and Jesus requires faith. It is a faith statement. It is challenging. It is in fact hard to understand and impossible to prove. It is a mystery. It is a metaphor. It’s a metaphor in the same way ALL the words we speak of God are metaphors for a reality beyond our understanding and expressing. It’s poetry and promise and truth that is more-than-factual.

What I’m saying is that however you work out your trinitarian incarnational theology is fine…as long as it doesn’t get in the way of the voice of the Good Shepherd that is calling you.

The voice of the Good Shepherd is calling you.

God is calling you. God is calling you into the protection of the sheepfold when you need rest and into the abundance of life in the pasture when it is time to go out into the world. This isn’t a text about prize you win when you have died. It’s about the God who is with you now in all that you do, as the psalmist writes, in your going out and coming in, your lying down and your rising up. It’s about a God who is with you in community. There is always a flock when we are talking about sheep.

And you know what I think is the most amazing thing about the voice of the Good Shepherd, about the call of God back into a life of love and abundance? It’s that through all of the awful, threatening, exclusionary theology that swirls all around us all the time…sometimes we do actually hear the Good and Loving Shepherd’s voice. Like I did when I came back to church. Maybe like you did, too.

Somehow, in spite of it all, we still hear God calling our names.

I want to end with a story that a historian of Palestine shares. Pastor Debra may have mentioned this before. If so, listen again to these words by E.E. Bishop, “During the riots in Palestine in the middle thirties a village near Haifa was condemned to collective punishment by having its sheep and cattle sequestered by the Government. The inhabitants however were permitted to redeem their possessions for a fixed price. Among them was an orphan shepherd boy, whose six or eight sheep…were all he had in the world for life and work. Somehow he obtained the money for their redemption.

He went to the big enclosure where the animals were penned, offering his money to the British sergeant in charge. The [guard] told him he was welcome to the requisite number of animals, but ridiculed the idea that he could possibly pick out his “little flock” from among the confiscated hundreds. The little shepherd thought differently, because he knew better…and giving his own “call”… “his own”[sheep] separated from the rest of the animals and trotted out after him….” [1]

May we hear the Good Shepherd’s call, ringing out above every voice that would deny God’s gracious love for us and all of creation…and may we follow.