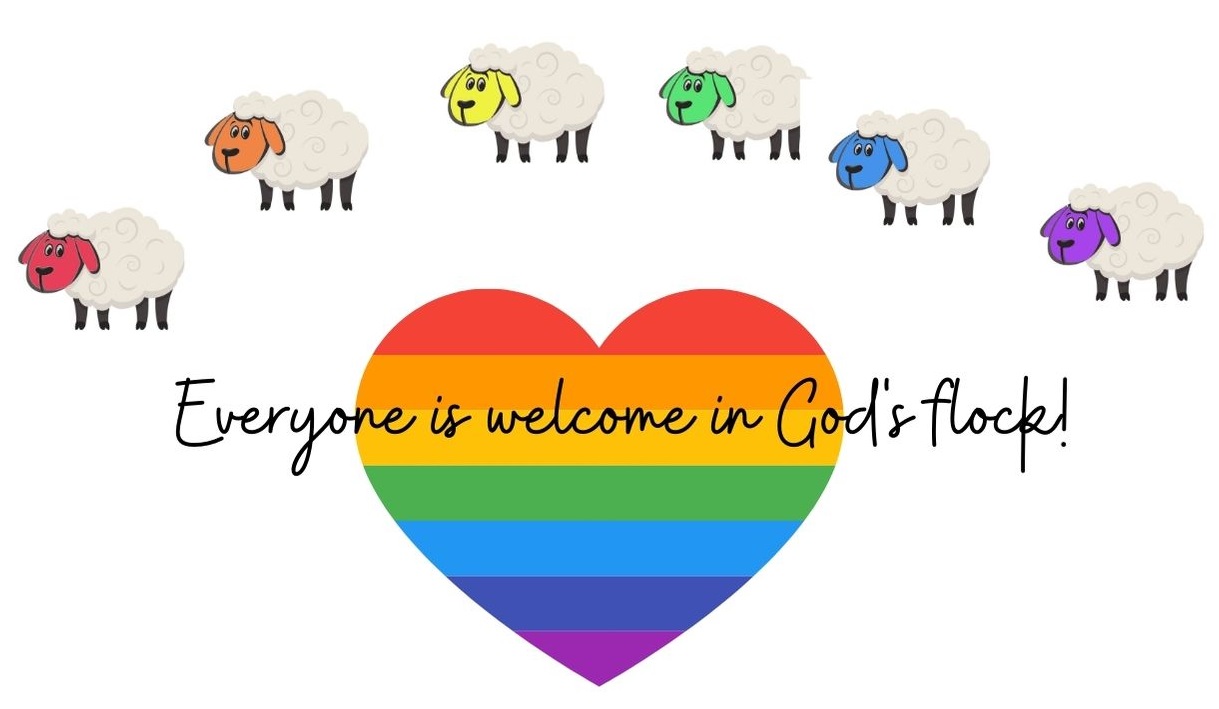 Hello church. Church in person. Church online. I want to ask you, like we did with the children just a moment ago, to breathe in and breathe out with me for a just a second.

I will not be afraid (breathe in) …for you are with me (breathe out).

Great, thanks, I needed that because now I have to figure out how to talk about eunuchs while there are children listening. I really do regret the timing of our coming back to in-person worship.

So I will just start here. I guess I can’t speak for all of us, because maybe some of y’all out there are so enlightened that you are like Dr. Ruth when it comes to talking about sex. (Does anyone know who Dr. Ruth is? That’s probably showing my age.) Let’s just suffice it to say she is someone who is very comfortable talking about sex.

But I know that I continue to have to get over no-small-bit of shame and embarrassment when it comes to talking about even something as truly innocuous as body parts. We are not talking about sexual acts here today – just body parts. But you can’t avoid talking about body parts when you are explaining what a eunuch is. So consider this your content warning. If you or someone in your vicinity is not okay with hearing the actual names of body parts, you might want to tune out right now. On a more serious note, I am also going to be mentioning violence against LGBTQ people in the sermon today, though not going into detail. So please be aware of that as well.

So we’ve fully established that it can be uncomfortable talking about our bodies, and I think this discomfort is one of the reasons why we have had so much trouble as a culture fully accepting people of diverse sexual orientations and gender identities. All the shame and discomfort we might feel about our own bodies and about God’s good gift of sexuality – well, I think it can be pretty easy to project that discomfort onto other people.

I just think we get unnecessarily worried about sexual orientation and gender identity when we truly do not have to be so worried. That worry, that anxiety, causes us as a society to do pretty awful things to lesbian, gay, bisexual, transgender, queer and intersex people. You may have heard the statistics before about the bullying that LGBTQIA people experience. One study reported that “LGBTQ youth who die by suicide are five times more likely to have been bullied than their straight counterparts.”(Source:

https://www.usnews.com/news/health-news/articles/2020-05-26/too-often-bullying-has-lethal-consequences-for-lgbt-teens) The 2020 Transgender Day of Remembrance just this past November recognized 350 trans people who were murdered last year. Ninety-eight percent of those were transgender women (in other words a person who has transitioned from male to female). Trans women are especially vulnerable. (Source: https://www.forbes.com/sites/jamiewareham/2020/11/11/350-transgender-people-have-been-murdered-in-2020-transgender-day-of-remembrance-list)

These murders are the most broken expression of the fear and anxiety that our culture carries about sexual orientation and gender identity. But less violent forms of this gender anxiety come out in things like “bathroom bills” that try to limit trans people’s access to bathrooms under a very false pretense. It is not true that trans women are a danger to cis-gender women who are all just trying to use the bathroom. It is vastly more dangerous for a trans woman to use a Men’s bathroom. It is far more likely that a trans people will be “denied access, verbally harassed or physically assaulted while trying to use public restrooms.” (Sources: https://www.cnn.com/2017/03/07/health/transgender-bathroom-law-facts-myths/index.html

As inclusive and affirming Christians, I think our role is to lower this sex and gender anxiety so that people who don’t conform to our little boxes of male or female can live safely and without discrimination. Our role is to acknowledge the sexual diversity of God’s good and beautiful creation, and welcome everybody into God’s family. And this is not some new-fangled 21st-century idea. It is right here in today’s scripture.

We are here in the book called The Acts of the Apostles, and throughout the book, there is this theme of who should be included in the family of God. There’s a debate in this book about whether Gentiles (non-Jews, which means all of us) should be included. Even Peter (Simon Peter, the first Pope, the rock on whom Jesus was going to build his church) is against including Gentiles at first. But God, working through in the Holy Spirit, helps all of the apostles learn that God desires greater and greater inclusion of all people.

Today’s scripture says that God is doing this. To start with, an angel visits Philip. I mean, who sends angels but God? The angel directs Philip down the road where he will encounter the Ethiopian eunuch. When Philip sees him, it’s the Spirit that tells Philip to go join the eunuch in his chariot. We are told that the eunuch has been in Jerusalem worshipping God, despite the fact that he is not Jewish, and he is reading the Prophet Isaiah. He has questions. He is a seeker. He asks Philip, who is Isaiah talking about here? Who is this suffering servant who will come to save?

Philip the Evangelist knows this is his chance to talk with the eunuch about Jesus. He’s like, “Yo! This text is talking about Jesus.” That’s a paraphrase because the scripture doesn’t actually tell us what Philip says. But it does say that Philip “proclaimed the good news about Jesus,” and Philip must have mentioned the whole baptism thing. Because when the chariot pulls up alongside some conveniently available water, the eunuch says “Look! Here is water! What is to stop me from being baptized?”

Now, before we go forward here, you need some information. I want to give credit to a few sources that I read this week here. Sarah Ngu preached an awesome sermon on this text at Forefront Church in New York City (https://www.forefrontnyc.com/sundays-archive/lent1), which I learned from. I read about this text from a biblical scholar named Rev. Dr. Mona West [1], and I learned from a Catholic biblical scholar named Dr. John W. Martens (https://www.americamagazine.org/content/good-word/acts-apostles-online-commentary-25 ).

So here’s what I learned.

First, about the Ethiopian bit of this Ethiopian eunuch situation. This person was not necessarily from the modern-day country of Ethiopia. The word translated as Ethiopia refers to all people in the land south of Egypt in Africa (it could include parts of Ethiopia but also the Sudan, etc.). The Greek word literally means “burnt face” meaning blackness. Sarah Ngu points out that this is the first person identified as black here in the New Testament. So that’s cool.

Now, what about him being called a eunuch? What does that mean? (Okay, here come those words I warned you about. We are all going to be fine.) According to Dr. Martens, a eunuch was “a boy or man, often slaves or prisoners of war, whose testicles had been crushed or whose penis had been cut off.”

I think it’s important to note that there is no contemporary analogy here. This is not exactly the same as any contemporary American gender identity. Eunuchs were very historically and culturally located. As you hear in this scripture, this eunuch actually had a kind of royal position managing the treasury of the Candace, the Queen of that region south of Egypt. This is a very particular role for a sexual minority.

But what the eunuch does have in common with modern sexual minorities (like transgender, gender non-conforming, or nonbinary people) is that because of their sexual diversity, they were excluded from religious institutions.

Now, here’s your biblical studies lesson for the week. If we go to the Hebrew Bible, what we sometimes call the Old Testament, we find that the law has some things to say about eunuchs. In both Leviticus and Deuteronomy, there is a rule that eunuchs are not welcome in the temple, not welcome to be a full part of the religious community. Deuteronomy 23:1 reads “No one whose testicles are crushed or whose penis is cut off shall be admitted to the assembly of the Lord.” That seems like a pretty clear rule.

So that’s one possible answer to “What is to stop me from being baptized?” Philip could have said, nope. The law says you are not allowed. You cannot be baptized. Why didn’t Philip do that?

It might have something to do with the fact that the eunuch is reading the prophet Isaiah. Not only does the prophet Isaiah talk about the suffering servant who Christians often identify with Jesus, but he also talks about eunuchs. Isaiah 56:4-5 has this vision of what a future, fully redeemed beloved community of God’s people would look like, and it says this:

“For thus says the Lord:
To the eunuchs who keep my sabbaths,
who choose the things that please me
and hold fast my covenant,
5 I will give, in my house and within my walls,
a monument and a name
better than sons and daughters;
I will give them an everlasting name
that shall endure forever.”

How remarkable is that! Jesus seems to be talking about sexual diversity – including what we in the 21st century call intersex people – people whose biological sex characteristics don’t neatly fit the expectations for male or female at birth. In fact, researchers estimate that 1% of people are intersex (Source: https://isna.org/faq/frequency/). Jesus affirms these folks. He affirms people who are “born this way.” He also affirms people who become sexual minorities later in their lives. He just does not seem worried about it. “Let anyone accept this who can.”

Friends, this text is NOT in the lectionary. You would not have heard this in church if you are only using the prescribed readings for each Sunday. But we need to hear this text. This text tells us, I think, not to be so darned worried about the status of other people’s genitals. (Which, I imagine, is also not something you thought you ever would hear in church.)

So, maybe Philip knew that Jesus said that, when he heard the Ethiopian eunuch, this person who is not a Jew and who is also a sexual minority, ask the question, “What is to stop me from being baptized?”

Philip knew that the answer is, “Nothing.”

So Philip baptized the eunuch and went on with his mission proclaiming the good news to the whole world!

The eunuch came out of the water and went away rejoicing.

Rejoicing because Christ has broken down every barrier that would keep people of various sexual orientations and gender identities out of the church.

Rejoicing because Christ has freed all of us from having to worry about other people’s sexual orientation and gender identity.

Rejoicing because of the promise of the Prophet Isaiah: that in the New Jerusalem, God’s holy city fully restored, there will be a place for everyone.

So let us rejoice because we can be that place right now.

1) Are there some topics that you need to take a few deep breaths about before you discuss them? What are some of those things that are hard to talk about?

3) Had you heard the bible passages about eunuchs that Pastor Chris shared in the sermon? What do you think is the effect of things like the lectionary (a three-year cycle of prescribed bible readings used by many denominations) which controls which bible passages people hear in worship?

4) Pastor Chris’s sermon also highlights the importance of knowing the Hebrew Bible (what we often call the Old Testament) in order to understand what is happening in the New Testament. How well do you feel you know the Hebrew Bible? What would you like to know more about?