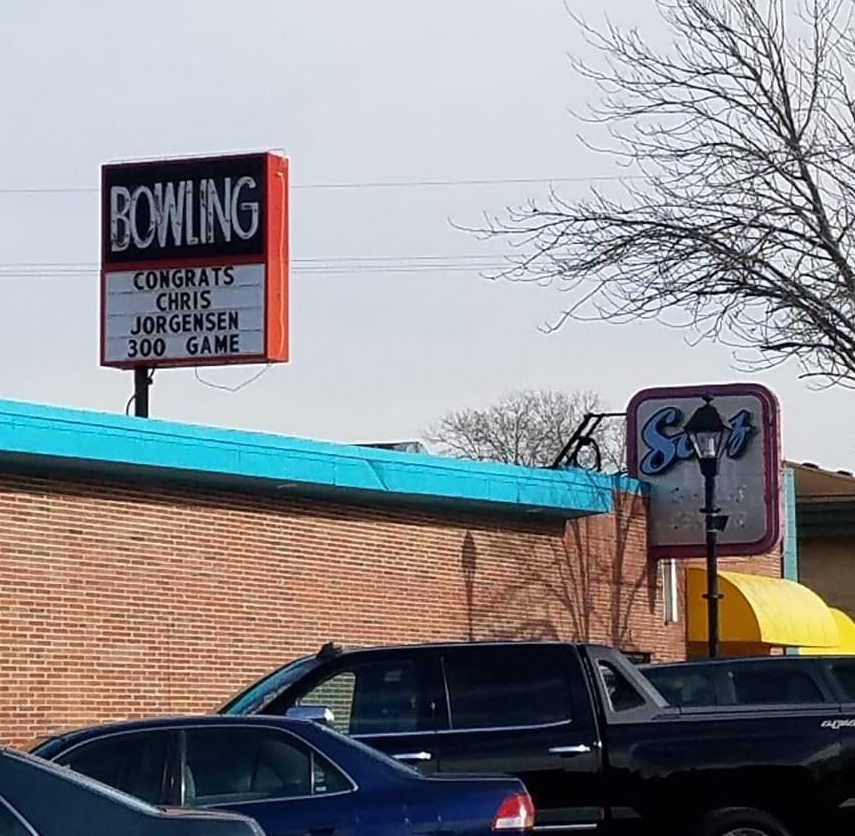 This is a photo of Chris Jorgensen’s greatest sporting achievement.

I mean, it’s not this Chris Jorgensen’s greatest achievement, but I bet it was for whatever Chris Jorgensen bowled that 300 game in Ralston a few years ago. A friend of mine saw the sign and took a picture for me – even though I’m pretty sure she knew that my highest bowling score ever was like 120. That is pretty sad because I come from a line of fairly accomplished women bowlers. My mom and her mom, my Grandma Griswold, both bowled for years in a bowling league. Grandma Griswold, in fact, was written up in the Appleton Post-Crescent, my hometown Wisconsin newspaper, for bowling her first 600-series at the age of 70.

So, given that, and the fact that it is Father’s Day this week, I was especially interested when I heard a story about bowling on “The Good News Podcast.” This story was about a real bowling dynasty. John Hinkle, Jr. of Peoria, Illinois was the son of two extraordinarily-committed bowlers. They bowled many nights a week – sometimes even sleeping at the bowling alley between leagues. With all that bowling, they were very good. John Sr. bowled games in the high 200s with regularity. Well, the apple did not fall far from the tree. John Jr. was an NCAA championship bowler.

Here’s what John Jr. said about the end of that game, “I had tears in my eyes for the 11th and 12th frame. I couldn’t even tell you where that last ball went. I had so many tears in my eyes just throwing it. I was just hoping that it would strike, and it did.” He continued, “Dad always shot 298, 299. Never had a three-hundred. I had goosebumps. I had chills. He was there.”

But I think we can all be moved by sports. I mean, when I think of the most virulent sports fans in my experience – they were women. My aforementioned Grandma Griswold…I definitely remember her yelling at the television during those lean Don Majkowski Green Bay Packer years. When I married into the Jorgensen family, it was definitely my mother-in-law Nancy who was the biggest Husker fan in the room.

Now it’s not that sports can’t have a slightly dark side. My husband Matt shared with me that he grew up with an irrational hatred of the Iowa Hawkeyes’ coach Hayden Frye. Matt was like, “I barely knew who he was…I just knew I didn’t like him.” I felt the way about the Chicago Bears most of my life – except during a brief period of adolescent rebellion when I actually owned a Jim McMahon Chicago Bears jersey. We all go through our phases, right?

So…sports. There’s definitely a sense of us-versus-them with our sports fandom, right? Doesn’t every team have some kind of arch-enemy? There can be a very provincial feeling to it. It can kind of engender hostility to those who cheer for the “other” team. Even though our rivalries should be just for fun, our allegiances can also cause divisions.

Now, there were some real concerns about division in the church at Galatia to whom Paul is writing in our scripture today. Their divisions were much more serious than Packers versus Bears. In his Letter to the Galatians, Paul is trying to eradicate these divisions. See, some missionaries had come to Galatia after Paul, and they were trying to tell the Galatians that the Gentile believers who had not been circumcised actually had to be circumcised in order to be fully in Christ, in order to be considered children of God.

Now we’ve spoken before about how difficult a sell adult-circumcision is to people. This was not going to happen. So these missionaries were trying to create a kind of hierarchy where the circumcised believers (the Jewish believers) were real children of God, and the Greek believers (the Gentiles) were a step below.

Well, this went against everything Paul had taught them about what it meant to be in Christ. So Paul reminds them of the rather famous words we hear in today’s scripture:

Some interpreters think this might have been part of the baptismal blessing in the early church. The point of this blessing is that our identity in Christ makes all of our divisions irrelevant. Before these trouble-making missionaries came, the members of the church at Galatia were living this radical inclusion out already. They were gathering across tribal lines and socioeconomic lines and gender lines not just once a week, but they were breaking bread together in their houses every day.

This crossing social barriers was highly unusual in Paul’s time. But for Paul, it was absolutely essential to his mission in the world. For Paul, the fact that tribal lines, cultural lines, were being crossed was one sign that God was doing something new in the world. This crossing of lines, this breaking down of divisions…it was just a glimpse of God’s desire for divisions and barriers to be broken down between all of God’s children.

God desires that for us as well. God desires for us the ability to transcend our sense of who is in our family, of who is our community, of who makes up our team. When we are in Christ, we come to understand that we are God’s children, made in God’s image…and so is every other sacred human person in the world.

So when we are truly in Christ, we recognize that not only are we all on the same team, we are all part of the same family. And that is a great gift. Because it means that we can celebrate with anyone who celebrates – as if we are celebrating for our own children, our own grandchildren, our own team.

…and speaking of running, we are part of the Kenyan team now…right, Pastor Peter? So I’ve been doing some research. Did you know that Kenyans are predicted to win five of the top six places in the men’s and women’s marathon at the Olympics? Well, as I told Peter this week, personally I only run when I’m being chased by a bear…but you know I’m going to be watching the marathon this summer!

You know I’m going to cheering for all the athletes from India and the Democratic Republic of the Congo and Mexico because of people who are part of our church family right here. We are all part of this amazing church and this amazing world community together, and nothing can stop us from celebrating with those who celebrate.

That’s because whoever and wherever we are, we are all God’s family.