Thank you, Peter, virtually. Peter is social distancing since he just traveled here from New Jersey. He will be able to come to the church to work with on site with us in about nine days. 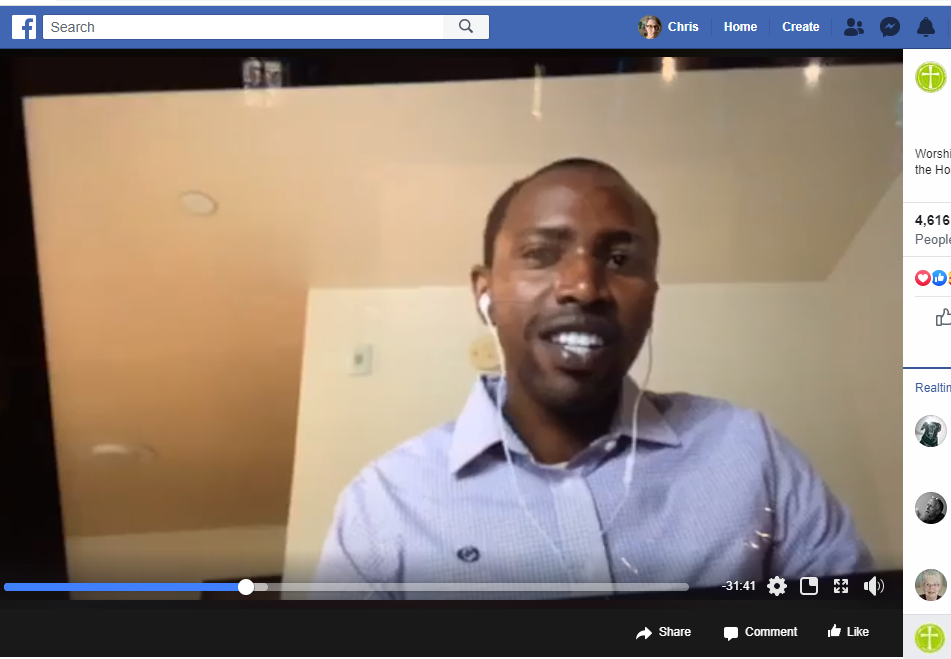 You heard Peter speak four languages in that video. English, obviously. He also spoke Swahili and Kikiyu, two languages from his native Kenya. And the fourth one – it was right in the middle – was German, a language Peter learned when he was a missionary in Germany. If I remember correctly, he learned it alongside German folks in a church he was serving and with the Syrian refugee community he worked with in Germany. We’ll learn more about Peter’s journey in our Zoom coffee hour after the service.

But I want to share this part of the story. The story of how Peter and I know each other and how we got to this point today is quite an interesting one. In January 2014, I went with my seminary classmates to study at Africa University in Zimbabwe. Peter was an undergraduate student there, and we had this intense experience of we Americans from Drew University studying alongside students like Peter who come to Africa University from all over the continent. If you look at a map, Kenya is not CLOSE to Zimbabwe. It’s about 1700 miles away…which is 300 miles further than New Jersey to Nebraska…and there are a couple of countries in between.

So anyway, Peter and I just happened to meet each other and spend a very formative two weeks of studying and living in community together, and thanks to the miracle of Facebook, we were able to keep in touch. So imagine my surprise when I found out that Peter was exploring coming to the Great Plains Annual Conference (Nebraska & Kansas) as an intern. See, I have always felt sure that something wonderful was going to come out of my time spent studying at Africa University, and when I heard this, I was like Holy Cow. This is it. Peter is coming to Hanscom Park.

I could never have predicted it or imagined it – that this amazing person who I met 9,000 miles away from here in Mutare, Zimbabwe – would be coming to work with us this summer. I simply could not have imagined it.

Which is why I believe it is the working of the Holy Spirit that Peter is in Omaha today.

In today’s scripture, we hear about the miraculous work of the Holy Spirit on that first Pentecost, that first time the Holy Spirit arrived. We hear how the Spirit arrived in this dramatic scene – like a rushing wind and like flames of fire. And we hear how the Spirit gives the disciples a unique gift – an ability speak to people from other lands in their own language.

The text says that Jews were gathered in Jerusalem on that day from every nation under heaven. There were people there from what we now know as Italy and Egypt and Turkey and Iran. In ancient times, this was the whole known world. These folks represented the entire world.

The Spirit allows the disciples to share the good news of Christ and of God’s love across languages and across cultures to all who were gathered in the city that day. Just like the Spirit empowers US to include EVERYONE in God’s work and God’s community today.

But not everyone thought this was amazing. In verse 12, we hear confusion, perplexity…and in verse 13 some people even sneer and say, “They are filled with new wine.” Despite the witness of the people who say, “Wow! They are speaking our language even though they are all Galileans,” some people are cynical. They say, “Those disciples must be drunk.” Those who are cynical do not believe in the amazing transformation that they are seeing right in front of them.

I want to be clear. I am not hating on cynical people. It is easy to be cynical. It has been a very cynicism-inducing kind-of-week. In fact, maybe if I wasn’t motivated by my Christian identity and frankly required to try to do something loving in this situation, I would have responded this week by saying “forget this” or “forget those people” whoever “those people” might be to you. A cynic might look away. A cynic might write people off. A cynic might even say, “How the heck is one little church in Omaha, Nebraska going to make a dent in the sin and suffering in this world?”

We have reasons to be cynical: the murder of George Floyd, and the murder of James Scurlock which happened right here in the streets of Omaha last night. The streets are bubbling over with violence because as Martin Luther King Jr. said, “A riot is the language of the unheard.” We live in a country battered and broken because of the sin of racism, because of the divisions that make people unable to hear each other’s voices, especially the voices of those who are oppressed and suffering and even dying.

I get it. Nobody wants riots. We don’t want violence of any kind. We want people to be able to sit down and see each other and respect each other and love one another. But if a riot is the language of the unheard, what can we do to actually hear each other? We have to learn to speak each other’s language, to understand each other’s perspectives, to be able to say “Wow, racism doesn’t seem like a problem to me, but maybe…maybe I should listen to the people who experience it every day?”

But cynicism and frankly fear makes it hard for me to even say these things out loud. It’s hard not to imagine that some people have clicked away by now – that some have stopped listening already. Because why would we choose to hear and to try to love one another when we have all of these differences, all of this struggle, all of this pain? Why should we choose the peace of Christ when the world entices us to pick up a weapon of war? And why…why in the world would we ever try to build a community that fully embraces all people when just carving out one racial or political corner would be a whole lot easier?

Well, I don’t know about you, but I do it because the Holy Spirit has given me a vision. I’ve seen a glimpse of it in the church I served in New York City, and it’s there in the scripture we heard today. It’s also in the Book of Revelation, chapter 7. There’s this gathering of people there worshipping God, “a great multitude that no one could count, from every nation, from all tribes and peoples and languages.” It’s this eschatological vision, this vision of what life will be like when we have reached the end, the fulfillment of God’s desires for us as humans, for us as God’s beloved creation. And it looks like this: all people are there: from all nations and tribes and peoples and languages.

I know this sounds crazy. I feel a little crazy saying it, but I’m going to anyway. In the midst of a world torn apart because of race and political ideology, the Holy Spirit has shown me that we…we who call ourselves Christians…and we who are particularly, the people of Hanscom Park church… We are going to create a church community that includes and affirms and celebrates everyone:

because there is no political party that overrides our Christian responsibility to honor the Holy Spirit in us that says we make the effort to reach out to love EVERYONE.

We don’t look at people who are different than us and say – “Hey! YOU learn Galilean. You learn how to be LIKE us, and THEN you can be part of the community.” Nope. We learn to speak your language. We learn to hear from others about their experience. And yes, that is hard. That means we might have to be uncomfortable and have hard conversations…about things like racism, about things like political differences. We can do that. We aren’t not cowards. God has not given us a spirit of fear but of power and of love, (2nd Timothy, my friends!) and we are filled with that spirit, the Holy Spirit. We are filled with such a powerful Spirit – that it empowers us to hear each and love each other, even when we are different and even we disagree.

Now you might have reason to be cynical about whether creating a multiracial, multicultural, inclusive community is possible here in this 90-something-percent white church. But I say it is possible. Why? Well, look at what the Holy Spirit has done already!

In the three years since I have been here, we have been clear about the kind of inclusive community we are building here. Here’s what the Holy Spirit has already done:

We’ve welcomed 56 new members. 56. We’ve had 16 baptisms, and we have another one scheduled for June 28! We received the blessing of 5 new Congolese American members last year, and then Pastor Eddie showed up one Wednesday afternoon at our North Door and now we have a partnership with the Ethiopian Community, and here’s Peter with us to help us reach out and grow in our inclusion and our welcome even more!

Friends, I don’t know where this is all going. But I do know that God wants ALL nations represented and all voices heard in God’s church. And it is a deep, deep blessing when we can be that church! Maybe it’s even the case, that creating communities rooted in God’s love like this one will be the way we end racism in this country and repair our present brokenness.

When God is with us, we can make a difference in this world…and we will do it as a community of Christ: all people, all races, all nations, together.

Thanks to be God.