Everybody’s got some kind of flood story by now, right? With flooding all around us here in Omaha, almost all of us have had friends or family or at least acquaintances who have been affected. Some of us may have even been personally been affected – in big and small ways.

So here’s my little flood story. A week ago Thursday, my daughter Ruby and I decided to make a quick trip down to Kansas City. We left around supper time on Thursday and planned to head back home on Saturday morning. Well, Thursday was a piece of cake. We flew right down I-29 in a little drizzly rain, but otherwise made it safely to KC in the usual three hours.

Coming home Saturday was another story. By Friday evening, I knew that we would not be able to take I-29 home, but my handy dandy iPhone (which noted road closures) was telling me I could take Hwy 136 at Brownville to Hwy 50 and head up into Omaha that way. No problem, I thought. I got this.

So we’re driving along I-29, we get to the Brownville exit, and I turn left to head into Nebraska. Which would have been great, except by that time, 136 had a big old double barrier in front of it. It was closed. I guess I didn’t got this.

I turned around in a parking lot and drove east into Rock Port, Missouri. I needed to look at the map on my phone, so we pulled into a gas station parking lot. A large pickup truck pulled in next to me, and about 5 seconds later, someone was knocking on the window of my car.

I rolled down my window and said, “Hello?” A man about my dad’s age said, “You’re trying to get to Omaha, aren’t you?” (I guess we looked like we weren’t from around there.) Then he said, “I followed you from where you turned around. Now here’s what you need to do. Stay on this highway until you get to Tarkio, then when you turn left, Hwy 59 will take you all the way to I-80, and you can get home from there. I used to be the game warden around here, and you won’t find any flooded roads on that route.” He was SUPER nice. So I thanked him, and as I rolled up my window, he said, “Be safe, kiddo.”

Sometimes God is like the former game warden of Atchison County, Missouri – chasing you down, giving directions, and telling you to “Be safe, kiddo.”

But if we explore this idea of being created in the image of God using today’s scripture as a resource, I think a slightly different understanding emerges. Maybe it’s a better-rounded understanding. And it’s all about love.

The First Letter of John we heard today is all about love. There are 52 references to love in its five chapters. It contains the rather famous assertion that “God IS Love.” But I don’t think we can just say “God is love” and leave it at that. It needs to be fleshed out. Remember, we have all the theological tools of the Wesleyan Quadrilateral to help us think about what “God is love” means.

For example, we can use the “tradition” part of the Quad to think about something we explored last week: namely, the Trinity. We might think of God being love as true because not only is God the Father, Son, and Holy Spirit – but God is also the relationship between the three. God is the persons of the trinity and the love between the persons.

We can look at the idea of the incarnation as well to learn about what God’s love is like. We discussed the incarnation two weeks ago. We talked about how scripture and tradition help us look at the life, teaching, death, and resurrection of Jesus to see what it means when we say God is love. Because the love of God put flesh on when Jesus walked among us.

The First Letter of John makes clear that the love he is talking about (in Greek, agape love) is the love that Jesus showed us. It is the love that God showed us by becoming one of us in Jesus Christ, and by giving his very self to bring us back into relationship with God. This is not some sentimental, saccharine kind of love. It is a self-sacrificing, self-giving love.

And we can reveal the image of God, the Imago Dei, that lies within each of us when we give of ourselves in a sacrificial way, when we go out of our way to care for one another, and when we put the well-being of someone else before our own well-being. Our letter-writer John tell us that no one has ever seen God, and yet God’s love can be perfected in us…if we love one another, as Christ has loved us. Every time we do that, we get just a little glimpse of who God is. 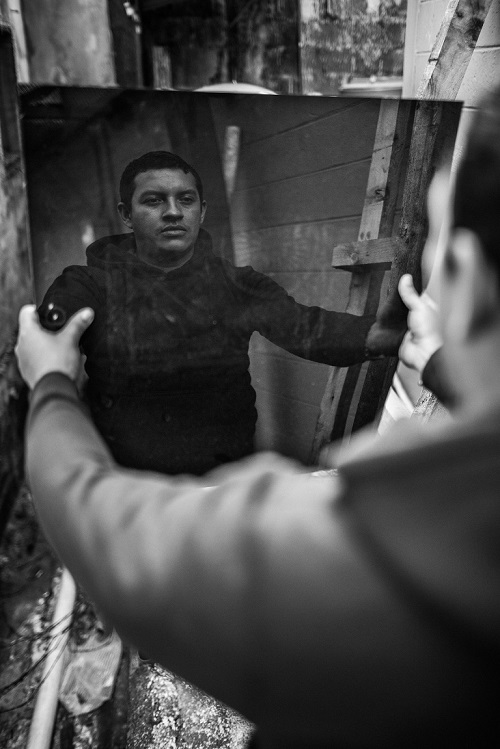 There are so many flood stories. Many I have heard or seen on the news. Some I have gathered from Facebook. Every story of people helping gives us another glimpse of how we are created in the image of God.

A man named Dustin Everett from Fremont wrote this as levees broke and bridges collapsed around his community. These are his words:

“It was bad and getting worse. Friends, acquaintances, and people I had not yet met were evacuated from their homes, either due to immediate or imminent danger. Then I saw our community become a family. I saw pastors, United Way representatives, students, immigrants, and every demographic you can name putting aside their politics, religion, prejudices, etc. and working together for a common good.

I saw immigrants acting as interpreters at shelters so the needs of some displaced Fremonters could be met. I saw students registering volunteers and accepting donations, and some making phone calls and pulling strings to get what was needed where it was needed.

Whether it was the Blackhawk helicopters that repeatedly performed air rescues, or volunteers performing air boat rescues, or Angel Pilots flying supplies in and people out, or any other act of philanthropy. When our fifth shelter opened up, an unknown benefactor donated over 300 cots…By end of Day Saturday it felt like we were finally starting to win this battle. Today, resources arrived: food, supplies, gasoline rolled in over roads that were not suitable for travel, but the need was great, and the need was met.”

I want to close my sermon by showing you this video. It’s a video of some trucks turning a corner. That’s all it is really. Just a bunch of trucks. I’m not sure why it is so moving to me. Maybe because I know that for those trucks to be rolling, so many people acted in the self-giving way of Jesus. So many people allowed God’s love to shine through: state troopers, national guard members, Hyvee truck drivers and stockers and executives who approved the donations. Even the people you can hear cheering them on as the trucks roll by.

I think, on some level, we all want God to chase us down and save us – like that game warden in Rock Port – and give us just that little direction, just that little assurance, just that little hope that we will make it through whatever we are facing. I think that’s what is happening here. But it’s not by some magic that we see the face of God. It’s God working through all of us to be the One Who Saves.

Take a look at this video. Maybe you all will see what I mean.

“No one has ever seen God;

if we love one another,

God lives in us,

1) What flood stories have you heard? What are some specific examples of people responding with the self-giving love of God?

2) Has there ever been a time when you need just a little help, just a little direction, to make it through some difficulty you were facing? Who or what helped you get through it?

3) What other ways have people shown you love throughout your life? How is that love similar to or different from the love of God?