Well friends, leave it to me to select a scripture for our Backpack Blessing that features an act of vandalism by people who follow Jesus.

You heard the story. We have this scene where Jesus is teaching. He is surrounded by the important people in his society: the Pharisees and the teachers of the law. Then there’s this big crowd that’s there trying to get to Jesus as well. In fact, there’s so many people that when some folks show up with a man on a stretcher, they can’t get the man to see Jesus so that he can be healed. The people who are crowded around Jesus: they are not moving. They don’t make a path for this paralyzed man to get to Jesus.

But the man’s friends do not give up. They somehow get the man onto to the roof of the building where Jesus is teaching, and I like how the Gospel of Mark describes what happens next. It says, “when they could not bring him to Jesus because of the crowd, they removed the roof above him; and after having dug through it, they let down the mat on which the paralytic lay.” (Mark 2:4). They literally ripped a hole in the roof of the house so that they could get their friend to Jesus. See? Vandalism. I like to call it necessary vandalism.

Now you might be wondering how Jesus responds. Does he scold the friends for tearing a hole in the roof and disturbing his time with the important people of society? No. He praises the faith of the friends for bringing the paralyzed man in from the margins, in from a place of exclusion, to the center by whatever means necessary.

The paralyzed man in this story represents a whole class of people who were excluded in ancient Judean society. These are the people who Jesus keeps including and healing. These people were traditionally kept out of places of power and influence and also kept out of the religious structures of the day. This category of excluded folks included lepers, the poor, people who were afflicted by demons, those who were considered ritually unclean for whatever reason. In Jesus’ world, simply being a person who was poor or a person with a disability was enough to deny you access to “the congregation of the elect.”

So it was no surprise that the people did not move aside and make way for the paralyzed man and his friends that day. The only thing the friends could do was take action – to do something disruptive – in order to move their paralyzed friend to the center so that he could be included.

Our public schools are tasked with this work as well. Friends, I love public schools – as you can tell by looking at my shirt. I think I first got a sense of the public schools’ mission of bringing those who are often excluded in our society to the center when my daughter Ruby attended Liberty Elementary. I could see at Liberty Elementary the work that was being done to make sure that every student had the same opportunities for education and flourishing when they walked through those doors.

For example, I was amazed to find out that there is a One World Community Health Center inside Liberty Elementary. It ensures that all families are able to access necessary health care like vaccines and treatment for common illnesses so that they have the same chance at flourishing as those families who have lots of resources and easy access to health care.

Public schools bring those who are traditionally kept on the margins to the center. Bringing those who were once marginalized to the center… well, it was not just the mission of the paralyzed man’s friends in today’s scripture, it was also Jesus’ mission on earth.

Once in awhile I get a glimpse of this kingdom of heaven, and I feel like it’s important to tell you when that happens. Last week, it was on my morning drive. My husband Matt is no longer working remotely in his digital marketing job because he has changed careers. Now he actually has to go somewhere, and we are sharing a car. So I had to drop him off at his new place of employment. He’s starting work this fall as a special education teacher at Gateway Elementary.

Gateway is the largest elementary school in the state of Nebraska. It’s located around 42nd and Q Street. Like many schools in OPS (and actually – as I learned on the state website – many schools around the state in rural, urban, and suburban areas), it is a Title One school. A Title One school is one where a certain percentage of children are living in poverty – in the case of Gateway, that is 84%. The Title One program provides funding to try to help create a level playing field – to make sure that students who have the extra burden of living in poverty also have the extra resources to help them succeed.

That’s the thing about public schools is that they serve and empower everyone. Even when other sectors of our society fail to support the most vulnerable, the schools step in. They provide free breakfast and lunch so students have enough to eat and are ready to learn. They provide special education and English-as-a-second-language classes. Gateway Elementary even has a Head Start program that provides early childhood education to low-income families.

So I dropped Matt off that morning at Gateway Elementary. I drove back up 42nd Street and turned into the neighborhood here on Marinda. There, I could see Norris Middle School up the hill. I know that Norris, as a public school, is also in the business of making sure that every student is able to access the education and support they need. If that means providing special services to students who live in poverty or students with disabilities, well, they do it. “No child left behind” is not just a slogan in schools like Norris. I know they try their best to fill every need. 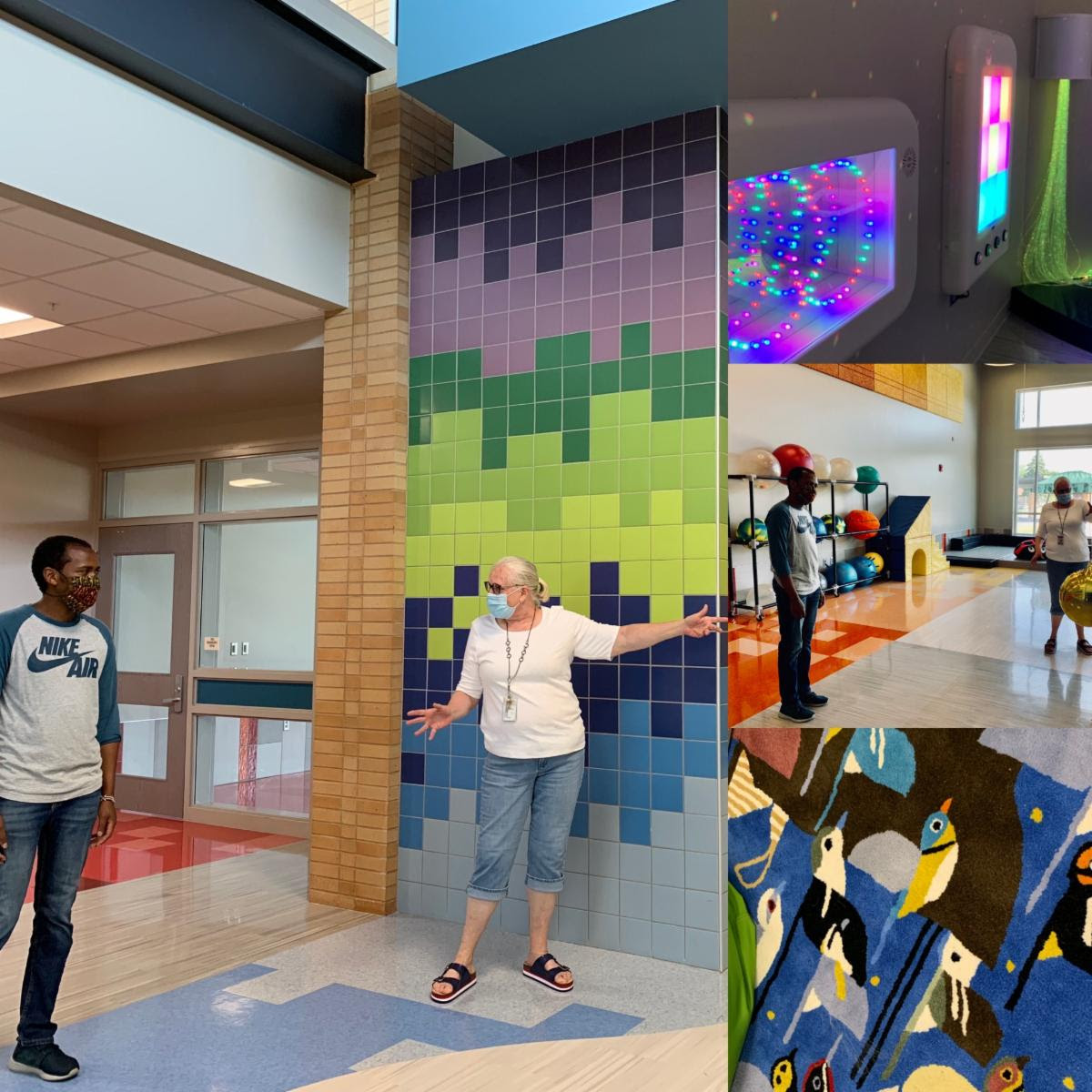 Then I turned toward the church, driving right past JP Lord School. You might already know that JP Lord is an incredibly unique school. It serves students with multiple significant physical and cognitive disabilities. In some school districts, programs like the one at JP Lord are housed in some old elementary school nobody else really wants to use. But not here in OPS.

Friends, you have heard me preach a whole sermon about this before…but I will say it again. The first time I toured JP Lord School, it was like getting a tour of the kingdom of heaven. No detail was overlooked and no expense was spared to ensure that the students and teachers at JP Lord would have a beautiful, functional, inspiring space in which to spend their days together. They didn’t just rip the roof off to make an amazing sensory education available to these students. They created a whole new building from the ground up.

As I parked my car in the church lot that day, all I could think was “We are right here in the middle of the Omaha Public School district. And the kingdom of heaven is all around us.”

Now I will note briefly that public schools do not use this language about Jesus or the kingdom of heaven, and I am perfectly okay with that. In a free and democratic society, that is how it should be. We can handle the talking about Jesus part here in church.

But even though they don’t talk about Jesus, here’s what the public schools are doing. They are ripping off that roof. They are making sure those who have been marginalized and excluded are brought to the center for love and compassion and education. They are bringing the kingdom of heaven here to earth every day.

So thank you to our public schools, and thanks be to God.