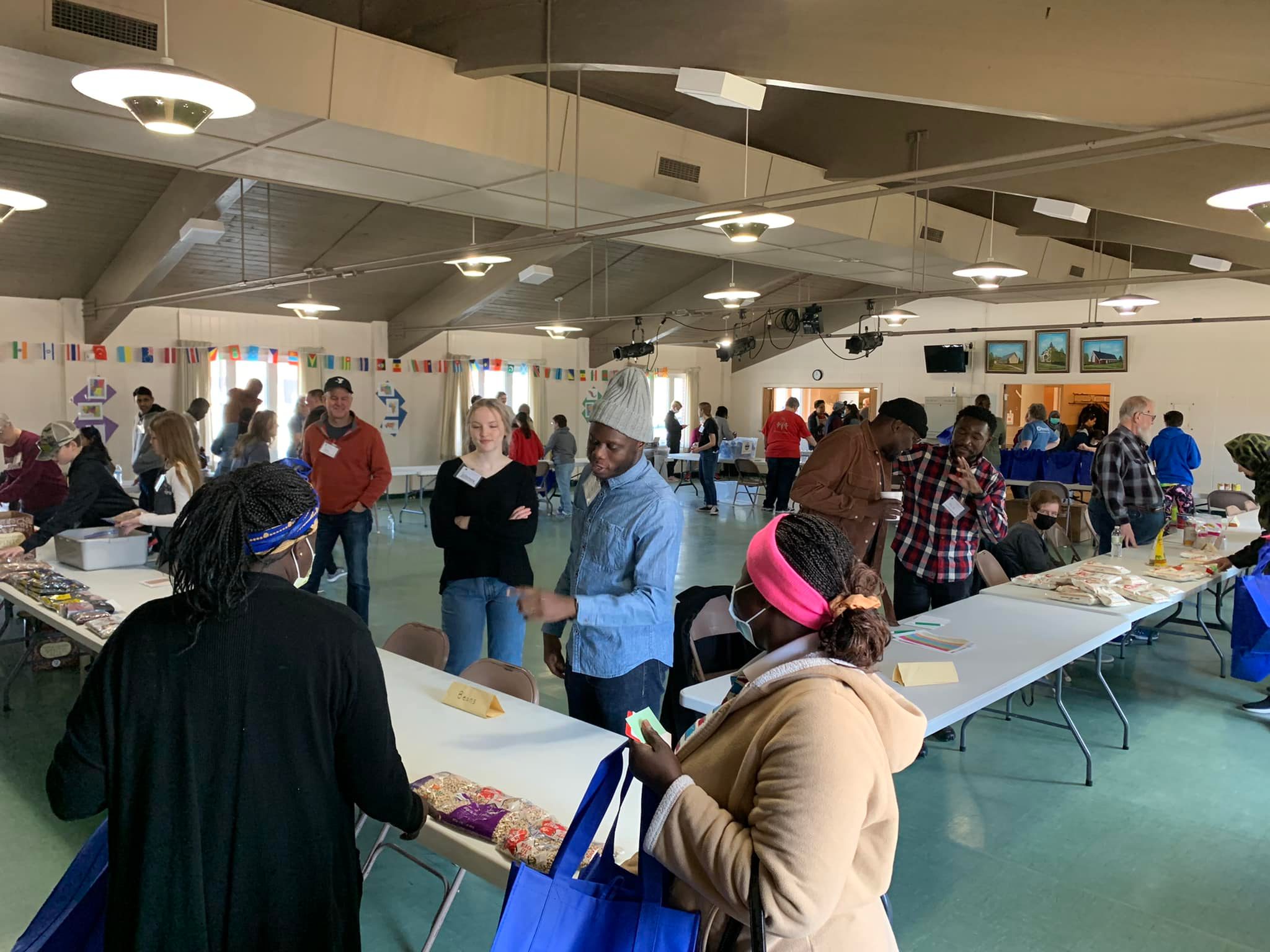 I have never preached on this scripture before, so it’s fun to explore something new with you today. Let’s dive right into this fascinating story, shall we?

Commentators note that, at this point, God becomes very directive with the Prophet Samuel. God tells Samuel exactly what to do. God is like, “Listen Samuel, you don’t have to announce, ‘I’m going to Bethlehem to commit treason!’ That would get you killed. Here’s what you do: just go to Jesse the Bethlehemite, and take a cow with you. You be all like, ‘Nothing to see here, just sacrificing this cow to the Lord.’ Then, you can invite Jesse and his sons to help you with the sacrifice, and I will tell you which son to choose.”

That is a VERY loose translation of the Hebrew.

Samuel is like, “Okay I can do this.” He brings the cow and gets Jesse and his sons to gather, so he can check them out. The first son that Prophet Samuel assesses is Eliab. Samuel is impressed. He’s got his cultural checklist. First born? Check! Tall? Check! Handsome? Check! He says (and this is the exact scripture now), “Surely the Lord’s anointed is now before the Lord.”

The Lord is like, “WRONG.” God says (exact quote again): “Do not look on his appearance or on the height of his stature, because I have rejected him; for the Lord does not see as mortals see; they look on the outward appearance, but the Lord looks on the heart.”

So Samuel checks out all of the other sons, Abinadab, Shammah, five more who aren’t even important enough to name. He’s listening to the voice of God, and he’s like, “Nope, nope, no, definitely not, and not you.” Then he has a problem! It appears that Jesse is all out of sons.

So Samuel says to Jesse: do you have any other sons? Jesse responds, “There remains yet the youngest, but he is keeping the sheep.”

You all, he has another son! What is that son doing? He’s out keeping the sheep!

He’s out keeping the sheep!

Anybody remember a whole sermon series we did last year about sheep, and you were like “Why does Pastor Chris keep talking about sheep?” Well, that’s because sheep and shepherds are critical to the Hebrew people’s history. Moses was a shepherd, Rachel was a shepherd, and kings in the Near East were often imagined as shepherds.

So, Samuel is like, “Well, bring him in here!”  The actual text reads: “[Jesse] sent and brought him in. Now [David] was ruddy, and had beautiful eyes, and was handsome. The Lord said, “Rise and anoint him; for this is the one.”

The very last son, the last one that traditional norms, who the world would have said should NEVER have been chosen, is the one that God wants to lead. It turns out that David is not just any king. He becomes the shepherd-king. He is the beloved one of God, the one who unified the divided tribes of Israel, who made Jerusalem the capital, and was Israel’s greatest King. In our Christian tradition, he is a precursor to Jesus. Jesus is a shepherd-king in a new way from the line of King David.

But David was the last one anyone expected God to pick. Remember, if humans were in charge, the plans for succession would have been with Eliab, the oldest. Who knows? Eliab might have been fine. He might have been okay. But God’s plans were with someone unexpected, and when the Prophet Samuel followed God’s guidance, the Israelite people experienced success beyond their wildest imaginations.

When we listen to God, when we follow the leading of the Spirit, when we let ourselves be guided by God’s light, we are capable of more than we can imagine.

I’ve told you before that I’ve been reflecting on the pandemic recently. Two years ago we were in what? Week 2 or 3 of the pandemic? During that time, you know I tried to keep a positive outlook for you all, but I probably knew more than anyone just how much all of our best laid plans were being disrupted.

See, we had been planning to begin the process of having a capital campaign to renovate our building to make it fully accessible to people with disabilities. We had this great plan and vision for our building: a building that during the early days of the pandemic literally no people except a few key staff were even entering. We were just not using the building. This was no time to focus on the building.

At the same time, I had, unbeknownst to you all (surprise!) started dreaming about hiring a part-time Youth Director / Family Hospitality Coordinator. I had imagined and hoped that person would lead the youth group and have a job welcoming and connecting families on Sunday mornings into the life of the church generally. They would support the great children’s teachers we already have by handling some of the administrative tasks of a growing children’s and youth program. I had a sense maybe this was the next step in moving us in the direction of growth and change that God had already started here.

On February 25th of 2020 (I checked my emails to get the exact date), I had coffee with Emily Baker. Many of you know Emily – she was our volunteer youth leader at the time, though she has since moved to Austin, Texas. We miss Emily. I sure do. Well, I floated this idea past her…to see if maybe that was a role she would consider applying for if we created it. We had a good talk. She was excited about the possibility.

Two weeks later, the pandemic began. There were no children or youth or families in the building anywhere.

I saw clearly that everything had to be put on hold. Serious hold. I had no idea how long.

It was during this time that I called Emily. I can remember this so clearly. I was on the phone up in our bedroom looking out the windows to the south. As I told her about putting everything on hold – the building plans, the Youth & Family Ministries position – I started to cry.

Emily said to me, “Chris, I’m not worried about this. Not for me and not for the church. God’s dreams for us are always bigger than our dreams for ourselves.” Which just made me cry more – because she was quoting something that I knew was true, and that I had (probably more than one time) said to her.

So we did. We prayed for and supported those affected by COVID, first responders, front-line workers. We worshipped online because people’s health was our first priority. I know that some churches worried that because there was no passing of the plate happening at that time. They were worried they would lose income…so they were tempted to rush back to worship. We did the opposite of that. The lives of our members and especially our most vulnerable community members were so important that we followed the best health care advice available on when and how it was safe to gather.

You know what? We didn’t have to worry about those plates not being passed. Our members (all of US!) we were so faithful and so generous. We gave online, and we sent checks because we wanted to be a part of a church that served others first.

As we sought to serve, we found out about the deeps needs in the immigrant and refugee communities in Omaha. We got a grant from Tyson Foods, and folks from so many different countries came to our church for assistance with groceries. It was like a light went on. God lit the way for Pastor Peter to be here that first summer and then come back full-time starting last summer, and we just kept following the light.

Just nine months after Pastor Peter started full-time, we had the first All People’s Pantry: A Culturally Appropriate Food Pantry event yesterday! This was a dream that God brought to us out of the community. It wasn’t from me or Pastor Peter sitting around brainstorming in an office. It happened because Pastor Peter followed God’s light out into the world. He went out into the community among the people and had so many conversations about peoples’ strengths and needs.

We served so many more people yesterday with so many more volunteers than I ever imagined. The people we served and those who did the serving (the volunteers) were from so many countries! It was a truly inclusive community project! Pastor Peter will give you the numbers in just a minute, but I can tell you I was blown away.

What happened yesterday was more than what I was dreaming before the pandemic.

Guess what else? Those things that I mourned when the pandemic started? The Accessible Building Plan and the Youth Director/Family Hospitality Coordinator? Those dreams I feared had died and would never come to fruition? Well, those are still going to happen.

We received an extraordinarily generous gift of money toward family ministries on Christmas Eve this year from a family in the church. So we are going to start our search for that Youth Director / Family Hospitality Coordinator at the end of April. The building project? Well, the Accessibility/Building Team has OWNED this project. I almost cried again when at our last meeting, I was like, “Well, I’m being appointed elsewhere, so maybe you need to talk to the new pastor or scale back or reconsider.” And they were like, “Pastor Chris, this is OUR vision, and we are going to go forward with it whether you are here or not.”

But God’s work is clearly not done.

Friends – God’s dreams for us are always bigger than our dreams for ourselves.

We will see these and so many more come to fruition if we just keep following the light.