So our scripture today includes a big parade: a large gathering of people all crowded together! Anybody else respond like this? “Oh heck no, we need to keep six feet apart! That’s a pandemic waiting to happen!”

I assume you would all be nodding if you were here. For my part, I can’t even watch TV anymore without yelling at people to get away from one another. When I’m in the grocery store, I see someone looking at a label, and I have to stop myself from yelling, “Don’t touch that!”

But today’s scripture is about a parade, so I’m going to have to invite you to take a deep breath and let’s put aside our anti-crowd instincts today. The parade in the scripture is the entrance of Jesus into Jerusalem on what we Christians call Palm Sunday. And I will admit that every time I preach about Palm Sunday, I talk about the same thing. I think it’s important. If you know this all already, well, thank you for listening to my previous sermons! You get a gold star.

But I will remind those of you who maybe don’t memorize my sermons…that on Palm Sunday in Jerusalem, there were actually two parades going on: Jesus’ parade, and the official parade of the Roman Empire. To understand the meaning of these two parades, you need to know a little bit about the history of the country Judea and its capital city Jerusalem. During the century before Jesus was born, the Roman Empire occupied Judea. Immediately, it began to oppress and exploit people with the help of the wealthy, privileged Judean families who collaborated with them. So you’ve got the Roman Empire, this outside, colonizing force, who worked with the wealthier families in Judea – to exploit everybody else.

As you can imagine, the peasants were not very happy about this system. Before the Roman Empire, they at least had their own land to grow food, and their family had something to eat. But during the Roman Empire, peasants were forced off their land so that wealthy rulers could have large fields to grow crops for sale and export. Now, the lucky peasants could maybe get jobs on the land they used to own, and they could subsist on meager pay as sharecroppers or day laborers. But the unlucky peasants who weren’t needed to farm the large estates ended up in the city as low-paid builders or beggars. Neither the lucky nor the unlucky peasants could easily feed their families under this new system.

So there was tension in Jerusalem the day Jesus arrived. It was the festival of the Passover. Passover was a celebration of the liberation of the Jews from Pharaoh in Egypt – a celebration of when the Jews rose up and escaped from Egypt so they could return to their Promised Land – the land that was currently being taken away from them by the Roman Empire. There was always risk of an uprising by the peasants during the Passover celebration in Jerusalem. So in order to remind the peasants that they had better stay in their place, there was a large Roman military parade into Jerusalem during Passover.

The procession was led by the hero of the privileged: Roman governor Pontius Pilate. He didn’t live in Jerusalem – he lived in an opulent city on the coast. But he knew that every Passover, he needed to come to Jerusalem to keep peace…through threat of violence. Pilate’s procession symbolized the power of the Roman Empire. He entered the city with war horses and armor, with golden eagles mounted on poles, royal banners: an ostentatious display of power and wealth. He wanted people to know: I am in charge. Pilate was a hero to those wealthy citizens who served the Roman Empire, and his parade was a threat to the vast peasant underclass.

Jesus’ procession, on the other hand, is populated by those very peasants. Jesus’ parade is a protest of the Empire and its values of violence and domination. Its symbols are a mockery of that other parade. Jesus has no war horse but a colt. His followers don’t have banners or glinting gold eagles. They have their coats and leafy branches – whatever they could pick up – to wave and to make a path.

Jesus’ crowd dreams of Jesus restoring Judea to its former glory, to bringing back the kingdom of their ancestor David. Like the wealthy families of Judea who collaborate with the Empire, the peasants too desire safety and security. They hope that Jesus will deliver it to them.

Jesus is their hero.

Both the crowds who gather to declare their allegiance: the wealthy Judeans who collaborated with the Empire, as well as the peasants crying out Hosanna – literally “save us” – as Jesus enters Jerusalem…they [and we too] have the same human desire for safety and security. The folks watching these two parades are very different crowds sharing very human desires. They are looking to two very different heroes for help.

In fact, even the peasant-crowd who cried out Hosanna to Jesus doesn’t seem to fully get it. In longing for their ancestor King David, they seem to be longing for a political solution wherein Jesus replaces the Roman Empire. Perhaps even the political imaginations of the peasants have been fully infiltrated by imperial values of domination.

We have the advantage of knowing the rest of the Holy Week story. When we look at what happened, we see that God does not save in the way the Empire saves. Jesus doesn’t ride into Jerusalem, get off his donkey, and bust out a giant cosmic war machine and destroy the empire. Instead Jesus is crucified. Our hero, Jesus, does not replace one exploitative, violent regime with one of his own. Our hero Jesus is killed. Jesus chooses to give his very self so that all people can be saved. By being the self-sacrificing hero of the peasants’ parade, Jesus aligns himself with the most vulnerable. He shows us that everyone will be saved…but we will be saved when we take care of the most vulnerable first.

Now I don’t have to tell you that all kinds of bad stuff is happening because of this coronavirus. In fact, I have started saying out loud, as a general explanation for what is going on in my life and with the church: Coronavirus ruins everything. So much of how we live our lives has is different now.

I want to be clear here that I don’t think God caused this coronavirus to teach us a lesson. But I do think that God can use every situation, even the very worst ones, and create something good and new and life-giving out of it.

Particularly, I think about who we might have considered heroes before all this started. Who did we really compensate and glorify? Sports stars and coaches, military generals, celebrities, the rich and famous, the conventionally powerful. We maybe even glorified our political leaders and parties. We cheered at their rallies. We treated them like heroes.

My friends, those kinds of heroes are much more like the Roman Emperor than like Jesus. Jesus rejected all of that kind of massive accumulation of wealth and admiration and power. He was completely without ego. He was all about saving and healing. All he wanted to do was make sure we were all saved – and he made the saving happen by giving his very self in service and solidarity with the poor and the most vulnerable.

I don’t think God caused this pandemic. But I do think God is using this pandemic to help us radically re-evaluate who we call a hero in our culture. Is it the person who stands on a podium and makes a speech and wants to be celebrated because they are so important and powerful? Or is the quietly serving individual who is giving of themselves to help the most vulnerable people who are the hardest hit victims of this disease?

Maybe yesterday my heroes looked like the Roman Emperor.

My heroes look like this. These are just pictures that people posted on Facebook of their loved ones. They were not lifted up in the media. They won’t be elected to anything or get some kind of medal or make front page news. 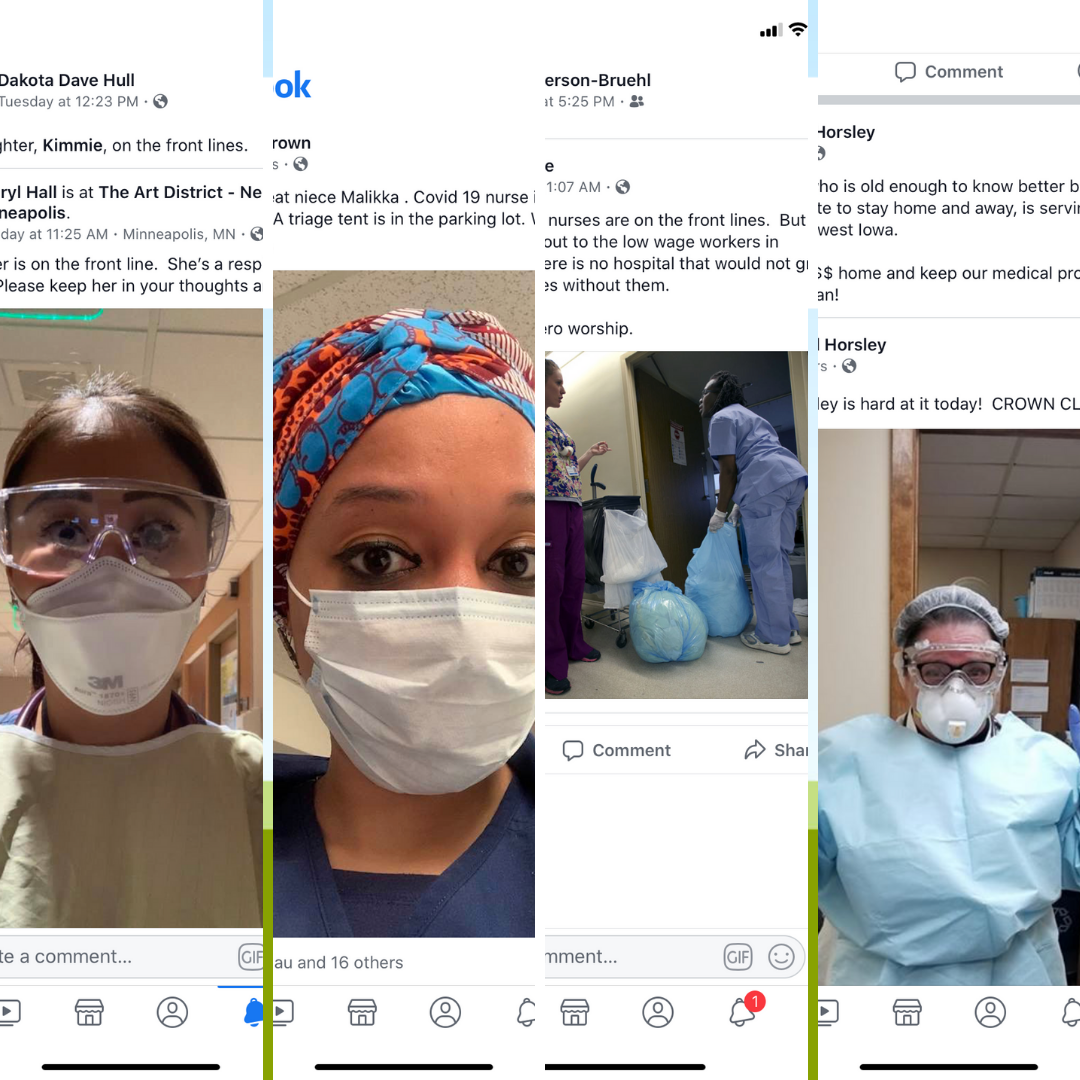 But they are my heroes:

Friends, it is easy to get discouraged in this time. Coronavirus ruins everything. But look! Look at all of these people, out there, in clinics and hospitals, even in make-shift tents, acting like Jesus, doing his work! And now imagine… millions, millions more just like them. Something like 16 million health care workers in the United States (https://www.kff.org/other/state-indicator/total-health-care-employment ).

As people who follow Jesus, we will come alongside these heroes in every way we can…even if that just means staying home, so we stay well. In doing so, we will be living for something bigger than ourselves.

We will be in Christ.

And we will be saved.

QUESTIONS FOR REFLECTION AND DISCUSSION

1) Who were some people you considered heroes before this whole coronavirus thing happened?

2) Who do you consider heroes now as you watch the pandemic unfold?

3) How can you come alongside these heroes, support them, and find ways to be the hands and feet of Jesus in your own life?