In the story of The Hobbit, there are various human-like creatures. Hobbits, of course. And humans. But today, I want to talk about elves and dwarves.

Elves and dwarves do not trust one another. It all started with an ancient feud that tumbled down through the generations. They are kind of like the Hatfields and the McCoys of Middle Earth. No one knows exactly how the feud started, but they definitely do not like one another.

The image before you is kind of a joke. You see the elf standing the foreground drinking coffee while Smaug the dragon tries to eat a dwarf. That elf does not care. That dwarf is not his problem.

But, as it turns out, these two enemies end up having to work together in order to achieve their goal. [SPOILER ALERT.] In order to kill the dragon Smaug who has stolen mounds and mounds of both dwarf-treasure and elf-treasure, these two peoples have to join forces. See, the elves are amazing sword-makers, and the dwarf king Thorin is skilled and strong-headed enough to think he can kill a dragon. So despite their not quite trusting each other, the elves give Thorin a special sword so that he can get the job done! I won’t tell you what happens next. You should go see the play. 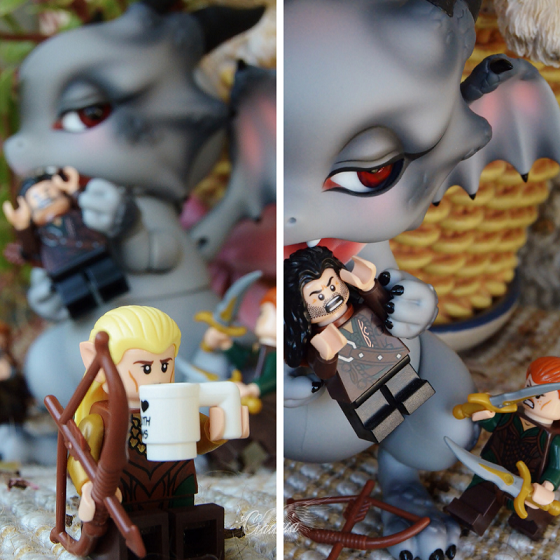 In order for these two peoples to work together, they have to get over their animosity and distrust of one another. They only are able to do that when the Elven Queen and the Dwarf King meet each other, and they find out neither one is as bad as the other supposed. And it’s good they figured it out. Because it turns out – they needed one another.

The dwarf could not say to the elf, “I have no need of you.”

Our denomination is having a bit of a dwarves versus elves, feuding Corinthians situation these days. At the end of February, there is going to be a meeting of delegates representing our entire worldwide United Methodist denomination. It is a special, extra meeting to specifically address questions of whether our churches can offer same sex weddings and whether lesbian, gay, bisexual and transgender people can be ordained as pastors. Currently, these two things are prohibited by the rules of The United Methodist Church.

However, congregations like ours have made clear statements about our intention to affirm and support people of all sexual orientations and gender identities in our local church – to the extent we are allowed by the denomination. You can see our full statement of inclusion on the homepage of our website, or in your bulletin every week under the word “Welcome.”

One proposed solution at the upcoming meeting – the one for which I am advocating – is called “The One Church Plan.” It would allow local congregations, like ours, to decide as a community of faith if we want to allow same sex weddings in our building. It would allow pastors like myself to decide if I want to preside over a same sex union. It would allow annual conferences (for us, our conference is comprised of all of Nebraska and Kansas) to decide if we as a conference will ordain LGBTQ people.

Now, some people are against “The One Church Plan” because they say it will simply push the denominational conflict about our differences down into the local church. I say, “Well, thank God!” Because the only hope we have of figuring out how to live together in our differences  is to have personal, respectful, compassionate conversations with people we actually know…rather than make assumptions about people who we don’t know. It’s quite hard to look into the face of someone you served alongside, someone you prayed for, someone you celebrated and mourned with and say, “I have no need of you.”

At a distance, it’s quite easy to do that. I have referenced before the toxic United Methodist groups I belong to on Facebook. Honestly, I probably should quit them but it’s kind like watching a train wreck – you can’t look away. I have a fairly high tolerance for conflict, but I feel most upset when I see the assumptions that people in those groups make about one another.

I’ll give you a couple real examples without revealing any names:

A biblical scholar posts a long explanation of his academic work and how it has helped him think carefully about the full inclusion of LGBTQ people in the church. A commenter replies saying, “When I saw what university you teach at, I assumed you would be wrong about this – but you make some pretty good points.” This is a bit problematic, but at least it’s honest and open. It’s also good example of the assumptions people make about those with whom they are feuding. It’s kind of like our friends in The Hobbit assuming: “If you are an elf, you can’t be trusted. If you are a dwarf, you are greedy and stupid.”

In another conversation on the Facebook page, a person mentioned that often times Christians are persecuted for standing up for their beliefs. This elicited the response of “Yes, if they are committed followers of Jesus Christ…not like this rabble.” In other words, the people who disagree with me on this topic are not really Christians.

Well, that’s hurtful. That’s something I can’t imagine someone in this congregation saying to someone else here. But it’s so easy online, when you have this distance, when you don’t really know the person with whom you are communicating, to say things and do things you would never do if you saw them as a fully human, beloved and flawed child of God – just like you are.

So I say “Good!” to the threat that the “One Church Plan” will move the conversation about LGBTQ inclusion into congregations. Because we actually see each other as human beings here.

In fact, you all have had these conversations a few years ago when you became a Reconciling Congregation and approved that statement of welcome I just mentioned. It was hard. I know it was. I’ve heard the stories. You survived it. We survived it. I think we are better for it. So I am willing to risk having more conversations at the congregational level.

We can have unity in diversity, and we can have these conversations with boundaries that make sure everyone is welcome. We can agree to refrain from name calling and accusing the other person of not being a Christian. We can agree to protect and care for the most vulnerable people so that our unity is not at the expense of those who are persecuted.

But everyone will be welcome here and will be part of conversations and decisions going forward – with the only stipulation that we treat each other as fully sacred, beloved children of God. I know we can do that. I have faith in God, and I have faith in us.

And besides. We can’t really get rid of one another, can we? Even if we leave the church or kick people out of the church, well here we are still on earth together. There are always going to be people with whom we disagree. We literally cannot change that. Even those who have tried to solve the problem of diversity via genocide (God help and forgive us)…even those people find out that we cannot eradicate the people with whom we have differences.

Because we have a job. To be the Church – to be Christ’s body on earth, to finish the work that Christ started. To feed the hungry, give hope to the hopeless, comfort the brokenhearted, free the oppressed, to proclaim good news to the poor and all of creation. It’s a big job. Some days it seems like an impossibly big job. It’s going to take every one of us and God’s help to get it all done.

So I am simply going to ask you to join me in prayer, every day between now and the end of Conference on February 26th that our United Methodist Church and the whole world can find a way to work toward the fullness of God’s kingdom…together.