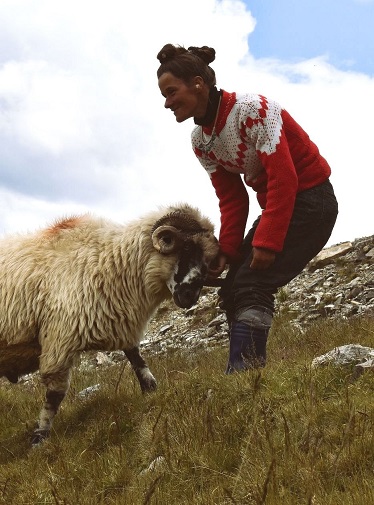 All shepherds are abhorrent to the Egyptians.

That’s some strong language, and when I first read it in today’s scripture, all I thought was, “Why are the Egyptians hating on shepherds?”

I actually did a lot of research and reading this week to figure it out.

But first, we need to understand the context of the story. The Joseph in the story is our famous Joseph-and-the-Amazing-Technicolor-Dreamcoat Joseph. He has been living in Egypt and working for the Pharaoh since his brothers sold him into slavery. Joseph has been very successful during his twenty-some years in Egypt. He is now Pharaoh’s right-hand man. Soon after he ascends to that position, there is a famine. Of course Joseph had predicted it with his technicolor dreams, so the Egyptians have plenty of food. Not so much in the land of Canaan where Joseph’s family lives.

So the brothers come to Egypt, they apologize for selling Joseph into slavery (whole other story), Joseph forgives them (eventually), they get some food, and then they go back up to Canaan and bring their father Israel to Egypt with them. In today’s scripture, Father Israel and Son Joseph are reunited.

This is the truth. The chosen people of God have always been shepherds. Starting with Abel, the son of Adam, who was a shepherd, through Abraham and all the patriarchs. Even the women of the Hebrew people were shepherds. Jacob (here called Israel – Joseph’s father) meets his wife Rachel at the place where she is taking her sheep to watered. So Joseph’s grandmother Rachel is a shepherdess.

Why? Well, that’s what I researched all week. There is not one answer, but some pretty good theories. Most of the following comes from a scholar named Aron Pinker.[1] Pinker’s article was 20 pages long, but it can probably all be summarized this way: Egyptians hate shepherds because they are different, and they are unsophisticated. They are rural and low-class.

First of all, they smell. The Hebrews do not wear fine cotton linens like the Egyptians. The wool clothes they wear held on to sweat, absorbed over time, and the Egyptians recoiled at the odor. They didn’t even want to sit next to them at dinner.

Secondly, they were foreigners. The Egyptians may have associated them with the nomadic tribes living on the outskirts of Egypt who scholars describe at “barbaric.” The nomads clashed with the settled Egyptian farmers, creating this contempt and suspicion between the Egyptians and all shepherds.

It was also definitely a class thing. The Hebrews were not settled farmers like the Egyptians. They were certainly not city-dwellers like Pharaoh and his crowd. They were not aristocratic. They were not even respectable. They were dirty and disdained.

So, another question arises, if Egyptians abhor shepherds, why in the world would Joseph tell his family to emphasize that point to the Pharaoh? Like, wouldn’t you want to play that down?

It’s because Joseph wants his family to have a safe and fruitful place to live, but Joseph knows it is not good to get too close to the Egyptians: these Egyptians who disdain the pastoral way of life of the Hebrews. These Egyptians who will in fact turn on the Hebrews when a new Pharaoh arises. Joseph wants his people to have safety and security, but he doesn’t want them learning the values of the riches-and-power-seeking Egyptians. Joseph’s message is, “Don’t get messed up with these Egyptians. The shepherding life of our forebears, living simply under the rule of our shepherd-God is a good one. Preserve it.”

Joseph’s plan works, too. The Pharaoh was happy for these smelly, foreigner shepherds to settle way out in the country, at the edge of Egypt, in Goshen.

As I pondered the Egyptians hating shepherds this week, it made me wonder whether we Americans really want to align ourselves with the spiritual heroes of this story. Do we really want to align ourselves with the low-class, smelly, foreigner shepherds…or might we rather give up our simple, pastoral, obedient-to-God identity to have access to the things that the rich, sophisticated, powerful Egyptians have?

We don’t like it, right? There’s that whole “sheeple” phenomenon. It’s actually a word in the dictionary – to my surprise. Sheeple are “people who are docile, compliant, or easily influenced: people likened to sheep.”[2] I mean, press the like button if you want to be known as a “sheeple.” Yeah, that’s what I thought. Of course, the only people who ever get called sheeple are the ones we disagree with.

Anyway, thanks to this sheeple image, I don’t like the idea of being a sheep. Yet here we are doing this whole sermon series not because we like being sheep. It’s because our faith demands it. There is almost no other biblical image so present in the text. From Genesis to Revelation, we have this image of God who is a shepherd, and friends, that makes us sheep.

So set aside your sheeple memes, and let’s take a peek here. A scholar named Kenneth Bailey writes about how the earliest Christian communities delighted in the image of the Good Shepherd, how it’s all over the catacombs of Rome from the first four centuries of Christianity. Bailey quotes another scholar A.P. Stanley who says, “What was the popular Religion of the first Christians? It was…the religion of the Good Shepherd. The kindness, the courage, the grace, the love, the beauty of the Good Shepherd was to them, if we may say so, Prayer Book and Articles, Creeds and Canons, all in one.” [3] All in that one image.

But of course, as the church merged with the empire, the people in power didn’t like being sheep either. We see this today in much of Christianity. We much prefer a conqueror God, King of King, Lord of Lords, a God at the seat of power, instead of this gentle shepherd God at the margins.

It seems to be a pretty universal human thing to do: try to reject our humility, to not want to embrace our sheep-hood. The church of the Roman Empire didn’t want this gentle and loving Savior who leads and cares and feeds his sheep. We would rather have a God that gets us the power and privilege that our egos desire, rather than the humble, simple, life where everyone has enough. Maybe not a lot but enough. Maybe not a palace, but a place where we can be safe and fed.

So, during the Children’s Time, there was one thing that our friend from 4-H Cole told me that I didn’t want to share with the children. [In fact, let’s cover this poor lamb’s ears.] Cole told me that when sheep are brought to the sale floor, the lead sheep will often not want to go onto the floor. This cautious sheep, used to keeping its head down in the fields, well, it’s not gonna go out on that sale floor.

So often, a goat or two is added to the herd of sheep, and a goat will happily go onto the sale floor. The goat goes out first and leads all the sheep onto the sale floor. What that means is that the sheep can then be sold, separated from their beloved flock, sometimes for breeding purposes, but often sold for meat. The goat literally leads the sheep to their death because they followed someone who was not one of them into a place they should not be.

Perhaps, you know where I am going with this.

This week, we were all appalled to see what could have been a protest quickly turn into a violent and insurrectionist mob that left five people dead, including one police officer.

But that’s not what was going on this week. This week and this season, a president and his co-conspirators used the sheep to try to stay in power when they had lost a free and fair election. They told the mob that they (the mob) could have power if they stormed the capital. And the mob, incited by the promise of power, complied.

What I think is most important to mention, what requires us to talk about this here in church, is that some of those in the mob seems to think that Jesus, the Good Shepherd (the one who divinely embodies kindness and courage and grace and love and beauty) is the one encouraging this kind of behavior. Some even had signs saying “Jesus Saves.” Some were carrying the Christian flag: the same flag that stands in this very sanctuary.

This requires me to say what I honestly think should go without saying: if you are being led to seek power through fomenting hate and violence, you are not being led by the Good Shepherd.

You are being led by a goat.

But we are Christians who follow the Good Shepherd. We must clearly align ourselves with the Hebrew shepherds who resisted the Egyptians and dwelt with those on the margins. We must not create the Good Shepherd in our own image, but submit to his tender care and leadership.

It is not wrong to be sheep if you know the Good Shepherd.

But for the love of God and this country, stay away from the goats.

[3] Stanley, Arthur P, “Study of Ecclesial History,” from Lectures on the Eastern Church IN Bailey, Kenneth. The Good Shepherd: A Thousand-year Journey from Psalm 23 to the New Testament. Downer’s Grove, IL: IVP Academic, 2014.