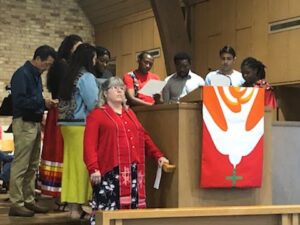 I have to start this sermon with a confession. I almost forgot about Pentecost this year.

When I was outlining this sermon series on all the things that I wanted to make sure I talked about before I left…When I was outlining this series, I totally forgot that today was Pentecost. So when we sat down to plan worship, I was like, “Eeeee – it’s Pentecost on the day I wanted to talk about forgiveness.” Then I was like, “I don’t care. We are just going to do it anyway.”

Now Pentecost, as you might have discerned from our time of “Welcoming the Spirit” this morning, is a celebration of the arrival of the Holy Spirit. The Spirit first came among Jesus’ followers 2,000 years ago and is still with us.

One remarkable thing about that arrival was that it allowed the disciples to speak in different languages because there were people from all over the world gathered in Jerusalem. We saw and heard that dramatized the morning. We started with the ancient Greek, thank to Jeanne. That was the original language of the scriptures. We heard the proliferation of that language into many different languages. This happened on the first Pentecost for a purpose. The Spirit gave these many languages so that the good news of Jesus could be spread all around the world.

Forgiveness is an essential part of the good news of Jesus that the Holy Spirit empowers us to share with the world.

Now, let me pause here to say I know forgiveness is complicated. I’ve talked to you before about how I used to try to avoid the forgiveness part of Christianity. That was because of some sub-optimal experiences I had growing up. I told you about how, at least to my young ears, it sounded like forgiveness was only possible if we were beat up a bit (or a lot) by guilt and shame, and then if we were really good and flagellated (that’s a fine Latin word, right?)… If we were adequately flagellated, feeling bad about ourselves, maybe then we would be forgiven for all of our really bad sins.

But the funny thing is: no one gets beat up in order to be forgiven in Luke’s gospel.

In fact, in the Gospel of Luke, we find this gorgeous and moving parable about forgiveness: the parable of the prodigal son that Dale read for us this morning. There is not a lick of flagellation in here. In fact, the story’s protagonist, this Prodigal Son, experiences that human tendency to beat ourselves up. He is wallowing in self-hate and despair when he drags himself back to his father’s house. He intends to grovel. But he never has to say a word. He encounters the divine character of forgiveness which is complete and without reservation and comes running toward us even before we ask to be forgiven.

Friends, like I said, I know this is complicated. Life is never simple. There are some things in this world that are extremely difficult to forgive or simply unforgivable by humans. If you have experienced trauma or abuse, I am not going to stand up here and say, “Oh, just forgive.” I want you to be in conversation with your therapist about what healing looks like for you. Furthermore, forgiveness always leaves room for boundaries. You can forgive and say, “I will not be treated that way again.” That is good. People can be held accountable, and we can forgive. That is my caveat here. I don’t know your pain, and I am not trying to say “just forgive” like it’s easy.

What I am saying is that there is a whole universe of things, things that do not rise to the level of abuse or trauma, that can be forgiven. There are slights to our egos, offenses we have taken, disagreements we have not been able to get over. If there are people you care about from whom you are separated, please consider doing something about it. If you can’t do it on your own, maybe go to a counselor, work through your feelings, and figure out how to reconcile or at least let go of the anger you are carrying.

Maybe even more than forgiving others, I want to talk about forgiving yourself. This gospel tells us that God forgives us – but it is another step to forgive yourself. There are so many things that we have done or left undone or wish we would have done differently. But they are all in the past now. So I pray, more than anything, that you will receive the miraculous grace of being able to forgive yourself. Because true forgiveness transforms us into more grace-filled people. When we forgive ourselves and others, it empowers all of us to do better, to be better agents of God’s graceful compassion and justice in the world.

Now, I would not have preached about this if it wasn’t for Morrie. As you know, I’ve been using the book Tuesdays with Morrie as inspiration for this sermon series. Morrie was dying of ALS when his student Mitch captured his words for the book. Morrie is much wiser than I am, so I’m going to end with Morrie’s story here.

One day they are talking, and Morrie tells Mitch a story. He points to a bust, a sculpture of his face that he keeps in his room. The man who made it was named Norman. Morrie and Norman were good friends and spent several weeks together so that Norman could sculpt that bust of Morrie. Norman really captured Morrie’s whimsical and wise presence. Norman was a rare friend who really saw the essence of who Morrie was.

Eventually, Morrie says this to Mitch. I’m quoting directly from the book now:

Morrie says, “Well, here’s the sad part of the story…Norman and his wife moved away to Chicago. A little while later, my wife, Charlotte, had to have a pretty serious operation. Norman and his wife never got in touch with us. I know they knew about it. Charlotte and I were very hurt because they never called to see how she was. So we dropped the relationship.”

“Over the years, I met Norman a few times and he always tried to reconcile, but I didn’t accept it. I wasn’t satisfied with his explanation. I was prideful. I shrugged him off.”

[Mitch writes:] He was crying again, a soft and quiet cry, and because his head was back, the tears rolled off to the side of his face before they reached his lips…He wept for a few minutes, alone with his memories.

“I always wished I had done more with my work; I wished I had written more books. I used to beat myself up over it. Now I see that never did any good. Make peace. You need to make peace with yourself and everyone around you.”

“Forgive yourself.” [He said.] “Forgive others. Don’t wait, Mitch. Not everyone gets the time I am getting. Not everyone is as lucky.”

Friends, today is Pentecost. The Spirit is with us, and we are forgiven and freed.