I want to start by telling you all the I am also preaching at the Urban Abbey this morning at 9 AM and 11 AM. I don’t have access to a time turner or teleporter…they actually record their worship on Saturday afternoon, so that’s how it was possible. Their Pastor Debra needed me as a bit of a last minute fill-in, so she said “Yeah, just preach on whatever you were going to at Hanscom Park this week.” So they got rock badgers, too. 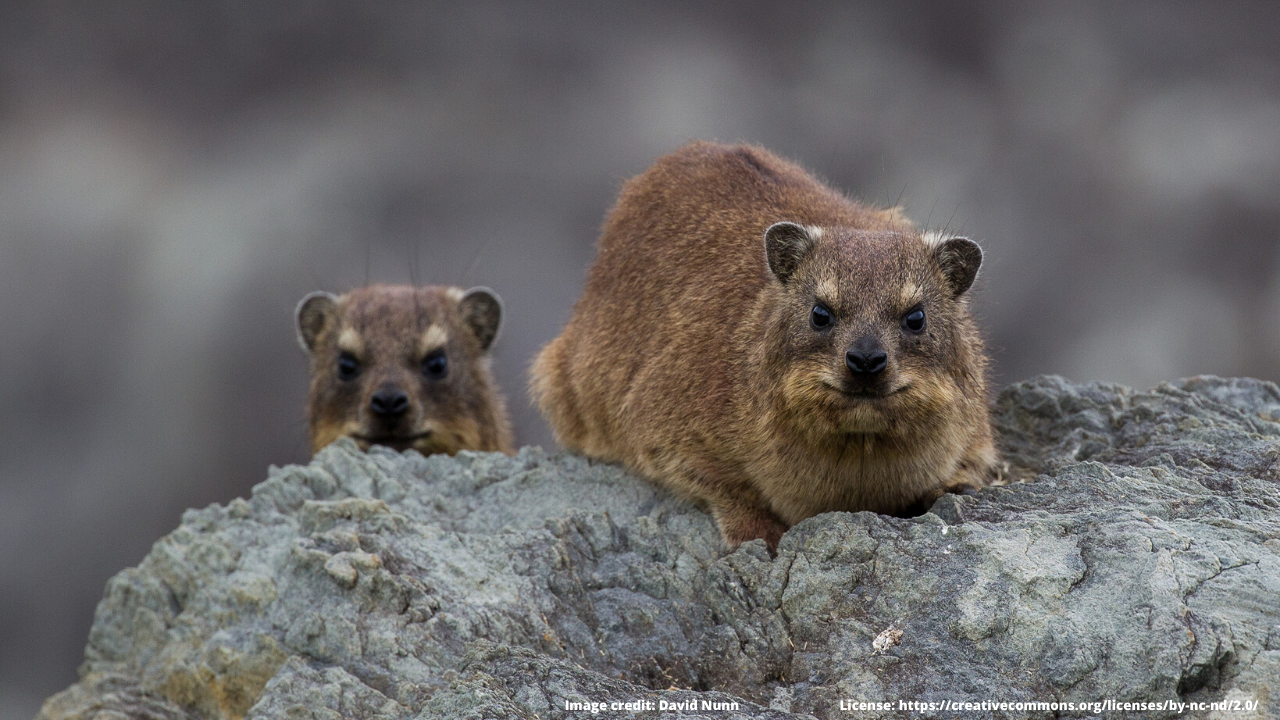 So I brought a picture for all you newbies. See how cute and roly poly they are? They are also fascinating. Rock badgers are also known as rock hyrax or coneys (I know this is review, but we have to get some of you up to speed). They live in the Middle East and Africa. Some of them live in the Holy Land, where our psalmist lived. They are ubiquitous there – they are all over the place, sort of like squirrels are here.

Now, I know some of you probably don’t like rodents and are hating on the rock badgers right now. Well, get this. They are NOT rodents! In fact, rock badgers are related NOT to rodents or squirrels or even badgers. Their closest living relatives are elephants and manatees. In fact, you can’t see them in the picture, but they have tiny little tusks, and their feet are just like little elephant feet with flat little toenails. That’s how biologists know they belong to the elephant family and not the rodent one. In summary, they are indisputably adorable.

If we ever get to go back to the Omaha zoo again, you can find them in the Africa exhibit which is outdoors…but only in the summer. See, rock badgers have poorly developed thermoregulation systems. In other words, they can’t regulate their own body temperature very well, so they have to stay inside during the Nebraska winter. Even in the warm climate of the Middle East, the reason they lay around on the rocks or even in little piles of rock badgers all the time is to keep warm. They need other rock badgers and warm rocks to survive when it gets cool.

Now, you might find rock badgers to be an odd sermon topic. But I disagree. I often preach about rock badgers around Earth Day because we find them right here in Psalm 104, which is a glorious celebration of God’s good creation. In naming the wisdom and splendor of God’s creation, the psalmist pauses to consider the rock badger. They write, “The rocks are a refuge for the rock badgers.” This is admittedly one small line and would be easy skip by…but I originally became enamored with rock badgers because of a 1975 commentary on this psalm. It was by a man named Walter Harrelson, and it really struck me.

I am going to remind us of what he wrote in spite of its slightly-outdated 1975 language. Professor Harrelson writes: “God made fir trees for the storks to nest in, and he made storks to nest in the fir trees. He made high, inaccessible mountains for the wild goats to run and jump upon, and he made wild goats to do the jumping and cavorting. He created the vast expanse of rock-covered earth in eastern Jordan for rock badgers to live and play in, and he created rock badgers for the rocks.” Then he continues: “Storks and goats and badgers do not serve (hu)mankind. They do what is appropriate to them.”

I love the way Harrelson writes about creation here. I love how he invites us to imagine a God who cares enough to create such delightfully diverse creatures and landscapes – and how God creates the environment and the creatures with this deep intentionality. These storks are gonna need some fir trees. And those trees, well, they’d look nice with some birds in them. The badgers are gonna need some rocks, and wouldn’t those rocks look great with some chubby, tusked piles of rock badgers on them?

To be clear, I believe in evolution. These things didn’t develop through cosmic zapping or snapping of fingers. But I also believe that God is both the source of all life that has evolved – and is present and creating in every moment of that evolution. In that sense, God created and is creating the rock badgers for those rocks and the storks for the trees even now.

In the media, there has been a lot of talk about what we are supposed to be learning during this pandemic and this time of social distancing.[1] To be sure, we are learning a lot about how changing our habits is affecting the environment in positive ways. I’m sure you’ve seen the pictures of what cities look like when they are not clouded by smog now that driving has been reduced. Of course, no one has cared enough to mention rock badgers in any of the articles I read, but I have read about other animals – including foxes and coyotes [2] and sea turtles [3] – beginning to flourish again as humans have receded into their homes. In Palestine, there is hope that the quarantine will slow the poaching of an endangered gazelle so that the species can recover. [4] Look what happens when we act differently!

I mean it. Look! This interruption of our previously perhaps mindless routines calls us to new awareness. It gives us a moment to pause. It gives us new perspective. It enables us to reflect and decide what of our new habits should remain – and which of our old habits should fall away.

And during this time, I think it is worth taking a moment to consider the rock badger: how God loves and delights in them, how God created them with intention, how they are meant to live in harmony with their environment, and how they literally need one another to survive.

We too are loved. We are created with intention, to live in harmony with our environment, and we literally need one another to survive.

I recently read an article by a journalist named Max Fisher about what our post-pandemic new normal might be like.[1] It compared what we are experiencing now to communities that have lived through the constant threat of war. There were lots of negative long-term effects to hunkering down to be sure – including anxiety and fear that lasts even when the danger has receded.

But one thing that happens to people in crisis is what scientists call an increase in “prosocial” behavior. Prosocial behavior is that urge to take care of one another – to check on your neighbors and loved ones, to offer help, to care for those in need. We have seen this in a million ways: people helping one another as a response to this global pandemic. It has happened before during previous outbreaks of illness. Remember when it happened after 9-11?

This kind of crisis seems to bring forth from us something we were made for. We have evolved for this. As Fisher writes, “Early humans, trapped in a hostile environment, thrived when they cooperated, typically in groups of a few hundred. Now, as we are once again besieged by nature and isolated into small communities, our survival instincts are re-emerging.”

Helping one another literally helps us to survive. We know this. In the bible, it says it is not good for humans to be alone. When we look at how humans have evolved, we find that to be true. We need one another, especially in times of crisis. When there is so much suffering around us and so much of it is out of our control, it is a visceral – it’s almost a physical – relief to be able to help someone else.

When Debra called me this week and told me that her Grandpa had died, my heart broke for her. It still breaks. Death of a loved one is a terrible loss. And the fact that we can’t gather for large celebrations of life for the people we love is also terrible. It is grief piled upon grief. As much as I want to, I can’t snap my fingers and make those gatherings possible for Debra’s family or anyone’s family.

But when Debra asked me to help by preaching for her this week, I was so grateful. I can’t fix everything, but I can do something. Another human needs me, and I can help. Life is messed up right now, but this is what I am made for: to offer comfort and help in whatever small way I can.

This time of pause, this disruption, this global pandemic: it is not what any of us would have wished for. It’s causing suffering and grief that is completely out of our control. But it does give us a chance to rethink everything, to recognize what can happen when we make radical decisions to live in a different way. It helps us step back and consider who we are and what we are made for – and what a new life coming out of this pandemic could look like:

Rock badgers lounging in the sun.

Sea turtles gliding through the waves.

Gazelles frolicking in the valleys again.

Humans recognizing that we need one another to survive…and that such interdependence is not a weakness. It is a strength and a gift from a good God who created us with and for one another.