I love me some drama! I love the drama of the Pentecost story – the one in the first scripture we heard today. It’s this amazing story of the first time the Holy Spirit arrived among the disciples. There’s this violent, loud wind and tongues of fire, and all of a sudden, the disciples started speaking in other languages. It was this miraculous, instantaneous transformation. Even the bystanders are amazed! They can hardly believe what they are seeing!

I love this story. Truth be told, the Christian stories we like to tell are filled with this kind of drama, right? Throughout the book of Acts, we have these disciples engaging in dramatic ministry. They experience moments of blinding light that lead to conversion. They confront the local authorities who try to jail them for being trouble-makers. Practically every time they speak, someone decides to be part of their new Christian movement.

I also love the dramatic moments of our Methodist history: John Wesley’s adventures on the high seas, his sending out preachers on horseback to every corner of the American colonies, and most of all – that image of him standing outside the church on his father’s grave so that he could preach and change the hearts of hundreds of people all at one time.

Those are all Pentecost moments. They are unusual and notable and thrilling! I love them.

But the reality is that those moments are far and few between. We don’t hear the other stories. We don’t hear the stories of the day-to-day grind that led to those moments. I mean, when he wrote Acts of the Apostles, Luke never bothered to tell us how or who rented the room where the disciples were gathered on the day of Pentecost. He didn’t tell us where they got their food or supplies or how they managed to find one another in crowded Jerusalem when nobody had cell phones. We rarely hear the stories of John Wesley’s complicated rules for his preachers and his societies, or of the day-to-day lives of the early Methodists who still had to work in the mines and raise their children and then show up for the class meetings that helped them grow in faith.

Yet all of those small things happened so that we could be here celebrating Pentecost today.

The second scripture we heard today, this letter from Paul to the Romans, begins to get at where the Spirit is working in the nitty-gritty of life. She’s not just there for one big transformative moment. The Holy Spirit is part of the whole cycle that Paul identifies. He says, we are undergirded by our faith, and yet we still suffer. Suffering teaches us to endure, and that endurance changes our characters. We become people who endure, and then we become people who have hope because we have endured…and because we have faith. That is the cycle: faith – suffering – endurance – character – hope. It doesn’t happen all at once. It doesn’t happen just one time. It happens every day, over and over again. Faith – suffering – endurance – character – hope. 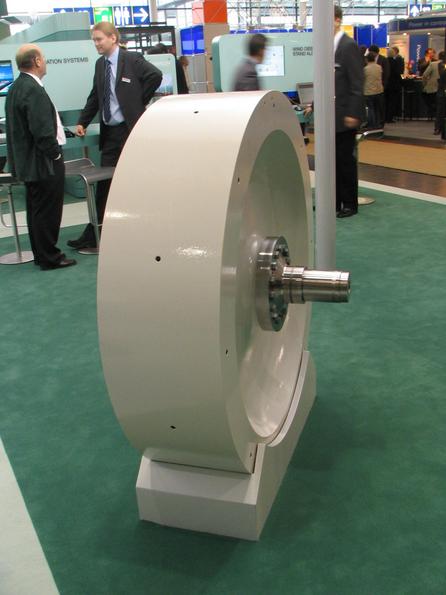 It reminds me of the “flywheel” analogy in the book Good to Great by Jim Collins. The flywheel, as the name implies, is a wheel. It’s a circle. Here’s an image of one. It’s very heavy. It needs a push…a whole lot of pushes in fact to start turning. This flywheel in the photo would be connected to some mechanical source to get it spinning. But once it starts turning, its own weight keeps the momentum going.

Collins talks about the flywheel as an analogy for businesses. In his work interviewing those businesses that have gone from “good to great,” who have become remarkably successful, he often asked them if they could identify the one thing they did that caused their business to dramatically improve.

They could not. Every great business he interviewed talked about a long process of small and disciplined movement in the same direction. Change did not happen overnight. The people working at the companies made all of the small efforts, hard pushes, all together until in the direction – swoosh! – the flywheel begins to spin on an unseen power.

One example he uses is the UCLA Bruins basketball team. In the 1960s and 70s, the Bruins won ten NCAA championships in 12 years. They were coached by a man, this kind-of hero of UCLA basketball legend, named John Wooden. Now, I have a question for you: how many years do you think Wooden was their coach before they won a championship? Give me a guess.

Fifteen years! Fifteen years of disciplined action in the same direction was what allowed the Bruins to achieve their dream. (Y’all giving any Nebraska football coaches that kind of time? You are not. But I digress.)

What I’m saying is that the Holy Spirit is with us in the big, dramatic moments. It is also with us in every small push on the flywheel.

I needed to hear that this week. It’s been a slog y’all. I ran into 57 administrative hiccups on the various tasks I am completing to get Peter started as our Associate Pastor. I ran into 57 more as I attempted to schedule visitations at assisted living places that are open – and then closed – and then open again, all with different rules and procedures! I think those of you on the Reimagining Team saw me the closest I’ve been to throwing in the towel…as we had what must be our one-millionth conversation about COVID protocols. I’m grateful that that team was pushing the flywheel right alongside me.

In our day-to-day slog…in our day-to-day struggles…in our day-to-day efforts, it is easy to forget about the Holy Spirit. It is easy to forget that She is with us, and She is pushing right alongside us. And our faith tells us that we are all pushing on a flywheel…that the more we work faithfully in one direction, the more that wheel starts to spin, the more we can be sure that when we look back, we will SEE the transformation that has happened. We know that the power of the Spirit will bring God’s kingdom to earth as it is in heaven…even if we can’t see it when we are mired in the day-to-day.

But the Spirit is here, and all I have to do (all we have to do) is faithfully keep going. All I have to do is faithfully execute the task in front of me, and keep going in the direction of God’s dream for my life, this community, and ultimately for the world. I have faith, that one day, when we look back, we will see what our faithful endurance has done – even if it is a slog right now.

I want to end with a story. I heard an interview from NPR’s Story Corps this week.[1] A woman named Connie Alvarez interviewed her mom Blanca who immigrated to the United States from Mexico in 1972. Blanca was pregnant with Connie at the time. During the interview, Connie asks her mom Blanca what kinds of job she had when they first arrived in the US. Blanca said she and her husband were gardeners and office cleaners. Connie said she remembered the offices.

Blanca replied, “You remember that? We had the night shift cleaning that’s why you know we had to take you and your brother. I didn’t have a babysitter.”

…and Connie shared, “I have memories of running into everyone’s office and eating candy from their candy dishes. I remember being with my brother in our pajamas with the little plastic feet. And I also remember you would always buy us a cup-of-noodle from the vending machine, like a snack, and then put us to bed on people’s office couches and then you’d carry us to the car when you guys were done cleaning the offices. I remember that. Did they ever know? Did your bosses ever know that you took your kids?”

Blanca laughed and said, “No, I don’t think so.”

Eventually Connie asked, “If you could do everything again, would you raise me differently?”

Her mom said, “I would dedicate more time I guess. You know, I was so busy going to school too that I guess I neglected you a little bit.”

Connie replied, “No. For me watching you go to school with two kids and trying to make ends meet that was the biggest inspiration for me to finish college. I thought there’s nothing that could stand in my way that didn’t stand in yours more. So. It’s the most important thing for me having gone to college, and I feel like anything I do from here on out is ok because I’ve already achieved my dream. Everything else is icing on the cake.”

Sometimes the work seems endless, and it is hard. With God’s help, we will keep going.

We will see that flywheel spin.